Warning: count(): Parameter must be an array or an object that implements Countable in /homepages/45/d96662078/htdocs/clickandbuilds/TheBackseatDriverReviews/wp-includes/post-template.php on line 316
↓
Home→Children→The Kids Aren’t Alright: The Teenagers of Sleepaway Camp

Robert Hiltzik’s 1983 slasher classic Sleepaway Camp has gone down in horror history as one of the most shocking twists in the genre. No one was expecting it. Back then, it was so off-the-wall and unexpected that no one saw it coming. No one thought that there was full-frontal sausage coming for them at the end, and to this day, people talk about it, especially as twists have become the norm. However, there’s something in Sleepaway Camp that many still sort of tip-toe around. Something that’s unspoken and uncomfortable: the fact that many of the murder victims are simply assholes that we’d actually like to see get killed. 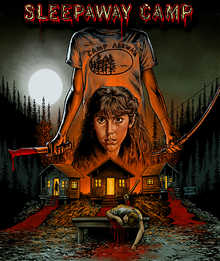 So happy I was never forced to go to camp as a child.

Here’s a bit of a disclaimer: no one should be murdered. While we may joke about it, the truth is that horrible, painful death is just wrong and awful. We cringe when we read about it in the news, and we wince when we see it onscreen. It’s even worse when it’s someone who is young, because the thought is that someone can turn bad behavior around. There’s hope for repentance. We want to believe that people are going to change; in the end, we still want to think that there’s something good that can be salvaged in someone. We want that treatment from others. At the end of the day, we all want forgiveness, not painful punishment. No one wants to think that there’s no hope for change in someone so young.
However, the simple truth is that some kids are complete assholes from a young age, and Sleepaway Camp delivers that in spades via the treatment of Angela (Felissa Rose) by the other campers. Angela does not have an easy lot: she’s shy and quiet, and as such, that makes her a target on multiple levels. Camp cook Artie (Owen Hughes) tries to molest her. Counselor Meg (Katherine Kamhi) and resident mean girl Judy (Karen Fields) are verbally abusive toward her, with one of my favorite lines of abuse delivered by Judy: “She’s a real carpenter’s dream: flat as a board and needs a screw!” She then has her sexually-frustrated love interest lured away, as though she somehow doesn’t deserve even the slightest interest. The kid is mocked for being quiet and in the role of the virgin; she’s clearly the outsider. Other campers latch on to the mocking, resulting in fights beyween Kenny (John E. Dunn), Mike (Tom Van Dell), Ricky (Jonathan Tierstan) and Paul (Christopher Collet). This isn’t enough to stop her ill treatment, though, as she’s hit with water balloons, thrown into the lake, and has sand thrown at her in clumps. That’s an awful amount of poor treatment for someone just because she’s quiet and not throwing around her sexuality. No one shows even a shred of remorse for these actions, either – we see Ricky and Paul defending her, but really, no one stops and says, “Hey, I think we’re really being awful to her. We should cut her some slack.” Even the authority figures allow this to happen; for them, it’s kids being kids, despite that we hate watching someone so quiet get pushed so hard and so far. In today’s world, being able to see suicide rates and cyber bullying, it’s disturbing and sad. 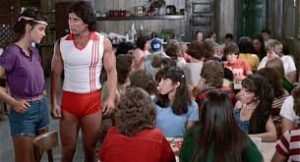 Never trust someone in an outfit like this. Any of them.

Which means that when Angela’s tormentors get their comeuppance, we’re a bit torn because we actively dislike the people that are being murdered. After Artie is a complete creep to what we presume is a teenage girl, we watch him get scalded with boiling water; I don’t know one person who wouldn’t want to do this to a man preying upon his or her young, naive, vulnerable daughter. This death, though, is far from the last in terms of it being in a gray area. Kenny is drowned, and Billy (Loris Sallahain) is stung to death by bees in a locked bathroom stall. Meg and Judy, as her main tormentors, are rewarded with the most horrific deaths: Meg is slashed through the back during a shower, and Judy… yikes. Have to hand it to Hiltzik: a red-hot curling iron to the vagina is a rather creative way to die. To this day, I will curl up into a little ball and hug my crotch at that scene. It makes every part of my female anatomy scream. It’s really horrible. And the worst part? Judy has been such a snotty, raging cunt to Angela that we’re not entirely sad to see her go. We’re upset more so at the thought of a hot curling iron in our most sensitive girl parts than we are at the loss of Judy’s life. That’s the unspoken truth of Sleepaway Camp: these kids are dicks, and it’s not their deaths that make us angry – we’re more so concerned about the thought of these modes of death happening rather than the characters that these events happen to. We don’t care about the people; in fact, we’re kind of happy that they’re being punished. 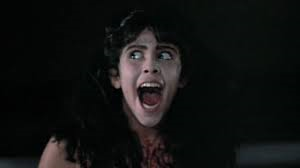 Did you really think I wasn’t going to use this image?

What does that say about us, though? It speaks to something we don’t want to admit is there: some kids grow up to be crappy human beings. We want to give everyone a pass, because that’s what good people do. However, as any teacher can attest… some kids just don’t have that shred of goodness in them. Some are just plain rotten. And it’s okay to admit that out loud. We can’t always pretend that people are good. Even our younger members of society.