Warning: count(): Parameter must be an array or an object that implements Countable in /homepages/45/d96662078/htdocs/clickandbuilds/TheBackseatDriverReviews/wp-includes/post-template.php on line 316
↓
Home→Comedy→Thumbs Up: The Ghostbusters Remake

Crap, I have a lot of crow to eat. Here I was thinking that this movie was going to suck. Here was thinking that it would be another one where I would have to suffer through for the sake of two children that wanted so badly to watch it (I have yet to forgive you, Frozen). Here I was thinking that I’d be writing something up about poor writing and bad special effects and pandering to a female audience. And yet here I am, about to do something I never thought I’d be doing: writing a glowing review of a remake of the 80s classic Ghostbusters. 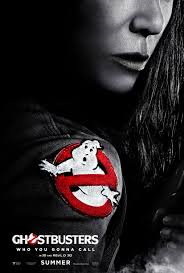 You were way better than I expected, you crafty devil.

How did we wind up here? Let’s back up a bit, because it’s relevant. I went to the movies last weekend with my daughters to see The Secret Life of Pets (which I found underwhelming – it’s missing something, like a beauty queen that pretends to want to go to nursing school so that the judges think she wants to help people and therefore win the pageant). Before the film began, a trailer for the new Ghostbusters film played. I was prepared to roll my eyes, but then something happened. On either side of me, both children gasped and clapped during the preview. “Mom,” one whispered, “we have to see this!” Later on, at home, they gushed about how “girls get to kick butt for once!” and it finally clicked that this remake was something for them; they needed those role models. So I went to watch it Friday night, as I wasn’t sure if my eight-year-old would be able to handle something scary (I don’t know about you, but I’m not shelling out extra money for my kids to leave a movie ten minutes in).

This film operates the way that a good remake should: it carves a story around characters rather than attempting to rehash every tiny aspect of magic that made the first one work. The amazing part of this is that it manages to incorporate pieces of very real experiences into these characters to make them more like us. Erin (Kristen Wiig) is a professor that is trying desperately to get tenure, which is a huge piece of commentary in and of itself; hell, that struggle is half of why I’m not going on for my doctoral degree, as much as I’d love to obtain it. Abby (Melissa McCarthy) is Erin’s best friend and former colleague, who is torn between finding proof of the supernatural and a never-ending quest for quality takeout (the struggle is real). Subway worker Patty (Leslie Jones) just wants to do her job before it’s interrupted by pesky ghosts. I had heard criticism that the black character was the only one who wasn’t a scientist, and to that extent, I agree with this: it would have been nice to have had an educated African-American woman on screen, as an equal. However, Patty is every part as smart as the scientists, and no one treats her as anything other than an asset to the team. Without Patty, they would be screwed. She’s so invaluable that it’s a fond reminder that there’s more to life than a degree (something many people learn in their adult lives). As for our eye candy, Chris Hemsworth is funny and self-aware, and I refuse to spoil anything there; what I will say, though, is that we’re at the point of equality where we can treat our beefcake men in the same manner as our supermodels in action films. In between, there’s the supernatural, fun cameos and laughs, and let me tell you, the jokes work. It’s actually funny without trying too hard, from snark to creepy people to someone getting doused with goo. 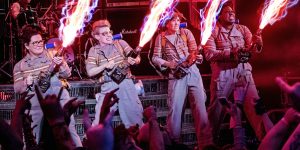 I’m telling you, this works.

The real prize here, though, goes to Kate McKinnon’s Holtzmann. This is a personal connection I made, so bear with me. When I was a kid, I was attracted to both boys and girls; I was an offbeat personality that liked books and science and the supernatural. I had short hair that refused to grow and was often mistaken for a boy because I wasn’t wearing dresses. It was an isolating experience. Onscreen, there was no one to whom I could connect, which added to the feeling of being alone. McKinnon’s Holtzmann is androgynous, pretty, funny, smart, and interested in Wiig’s Erin. To see someone like that on screen… oh my god am I envious of the little girls growing up today. Kids like me have someone to look up to, a character that can be smart and goofy, someone who may not be looking for Prince Charming like in every other movie; someone who is just herself and doesn’t care what the rest of the world thinks. It was moving to see that. Unless if you’ve grown up experiencing the feeling of being completely alone and not fitting in, you really don’t know how much it means to see someone like you. Better yet: seeing someone like you when you’re that small, that saves the day and is accepted by those around her. Holtzmann is funny and makes contributions toward the goal of saving the city, and she does so without apologizing for who she is. That’s incredible and those kids are so, so lucky to have that. 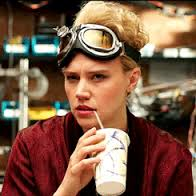 Thank you to everyone involved in this.

My friend Chris Downs summed it up nicely last week: this movie isn’t about the original fans, because they had their film already; this is for the younger generation. If you don’t want to see it, then don’t see it; I won’t be able to convince you otherwise. However, if you’re looking for something that’s good, or if you’ve ever been that kid that needed someone to look up to and you couldn’t find anything there, please, go see this. Better yet, take your daughter. It may mean more than you realize to her.