Warning: count(): Parameter must be an array or an object that implements Countable in /homepages/45/d96662078/htdocs/clickandbuilds/TheBackseatDriverReviews/wp-includes/post-template.php on line 316
↓
Home→Uncategorized→Kickstarter Alert: Down By Kontact

A really fun part of running this site has been the nifty stuff I’ve gotten exposed to, and the friends I’ve gotten to make as a result: good, funny, like-minded people, with talent to boot. One such person: Matthew Myers, who is writing a graphic novel called Down By Kontact. Sound familiar? I told you guys about it a few months ago. Well, way led to way, as it often does, and this time, it wasn’t under the best of circumstances. Down By Kontact‘s campaign came to a halt as the result of an issue that couldn’t be avoided. Matt had an awesome dad that unfortunately was taken by cancer. I’m telling you, cancer sucks so much ass. As such, Matt canceled the Kickstarter campaign to focus on his family (he’s a good egg, that one).

It’s now back up and running again. Click here to take a look. 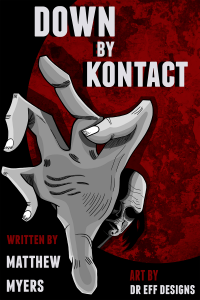 If you like what you see, go ahead and kick in a few bucks. Me? I’m funding this. I think it’s got a lot of potential; with some of the previews I’ve seen, I’m thinking cult classic. At the end of the day, sometimes it’s nice to give something new a chance.