Warning: count(): Parameter must be an array or an object that implements Countable in /homepages/45/d96662078/htdocs/clickandbuilds/TheBackseatDriverReviews/wp-includes/post-template.php on line 316
↓
Home→Bullshit→The Strange and Unusual: Normalcy as Falsity in Beetlejuice

Okay, what budding goth didn’t love Beetlejuice as a child? It had everything: ghosts, Tim Burton-brand special effects, and a Harry Belafonte soundtrack. Okay, maybe that last one wasn’t so goth, but it was fun. Another part of the fun? Lydia (Winona Ryder). Everyone wanted to be her, from her smooth voice to her pale skin to her involvement in the action. And really, when you compare her to her supposed role model, Delia (Catherine O’Hara), something becomes blatantly clear: Lydia, though different, is completely authentic, whereas her stepmother Delia is not. The difference between the two renders vastly different treatment and outcomes. 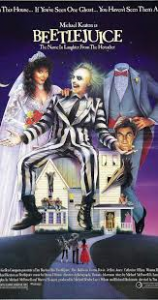 Dead or alive, it’ll get you every time.

Lydia doesn’t fit in, but this isn’t a bad thing. She’s pale, with dark circles under her eyes and a head-to-toe black wardrobe – a complete contrast to just about everyone else in the film. She speaks in hushed tones and doesn’t seem to be bothered by anything supernatural occurring in the film, choosing to embrace it with curiosity rather than letting fear rule her. Case in point: when she sees the green light under the attic door, she’s intially scared, but chooses instead to pick the lock to gain entry. The wonderment and openness to a new world allows her to access it, even if she’s not sure what to make of it all the time. It’s this demeanor that gives her the ability to function as a more understanding creature: she tells Adam (Alec Baldwin) and Barbara (Geena Davis), “Well, I’ve read through that Handbook for the Recently Deceased. It says, ‘live people ignore the strange and unusual.’ I, myself, am strange and unusual.” Her wording is packed: Lydia is self-aware that she doesn’t fit in, but is in fact one of the few that can drop the bullshit of the living world in order to gain a greater understanding of the larger picture. This ability means that she can understand the world of the dead, making her an asset to Adam, who refers to the handbook as reading “like stereo instructions.” He can’t make heads or tales of his new rulebook, something he needs to be able to grasp in order to continue a smooth existence; Lydia, however, does understand it, meaning that there her openness, while uncommon, is necessary in order to have a wider, more appreciative view of both worlds. 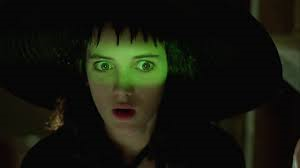 Come to the light, Lydia…

Her stepmother Delia, on the other hand, is a stark slam against the dangers of being a complete phony, despite that she appears outwardly normal. Delia may be superficially pretty, but she is nothing you’d want to follow you home: she can’t cook, the workers around the house hate her, and her relationship with her husband Charles (Jeffrey Jones) appears strained in everything from dialogue to lack of physical displays of affection to dirty looks and hand gestures. One exchange that typifies this:

Charles: Look at that kitchen. You’ll finally be able to cook a decent meal.
Delia: *glares*

This isn’t exactly the portrait of two people in a good relationship: Charles appeases his wife, letting her gut out the home he really loves as is in order to stop her from having a tantrum. This isn’t healthy. In fact, Delia only really seems to have one person in her life that she respects enough to listen to is Otho (Glenn Shadix), a self-serving, sniveling interior decorator. The relationship isn’t sexual, which means that Delia doesn’t really connect with anything physically: it all has to be about perception. This means how her house looks, how she’s dressed, and how good her dinner parties are. Everyone agrees that she’s bland: no one wants to stick around until the haunting incidents happen, and even then, she’s treated with disdain by her own guests. “Delia, you’re a flake,” her manager tells her. “You’ve always been a flake. If you want to scare someone, do it with your sculptures.” 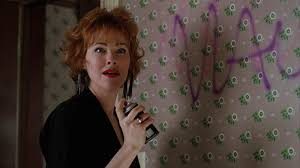 Writing on walls is as good at it gets for her.

So what does this teach us? For one, Beetlejuice stresses the importance of being a good person over being a socially accepted one. Those who operate inside of social normals of both dress and behavior are simply not happy: we have the childless Adam and Barbara, the recovering-from-a-nervous-breakdown Charles, and the socially scorned Delia. They may look normal, but they’re suffering on one level or another. Lydia, on the other hand, may not look and act like everyone else, but proves again and again that she’s a good person with a better view of the world as a whole. She’s the one that checks up on Barbara and Adam, making strides to try to give them a better afterlife; she’s the one that puts together that Beetlejuice was the snake, and refuses to give him the freedom he craves; she’s the one that agrees to go through with a wedding to a ghost in order to ensure the survival of two people she adores. If this is what being a goth kid is – a good person who looks a little different – then we could all stand to be a bit more goth.

In this world, convention leads to unhappiness, whether it’s being childless, dead or ostracized. The key difference is not the outer package we all wish to project. You can have the perfect facade and wind up alone, or the strangely-wrapped box that turns out to be a treasure. The takeaway from this film is to look beyond what’s on the inside to understand something outside of how you want others to see you. Only then will you be able to be open to the entire world.