Warning: count(): Parameter must be an array or an object that implements Countable in /homepages/45/d96662078/htdocs/clickandbuilds/TheBackseatDriverReviews/wp-includes/post-template.php on line 316
↓
Home→Uncategorized→Site Launch: That’s Not Current 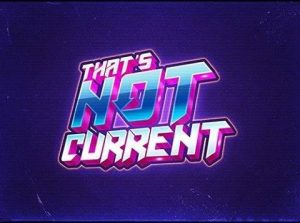 After months of gathering writers, artists and generally awesome people together, That’s Not Current is launching. I am so incredibly proud to be a part of this. I’ve gotten to make some amazing friends and colleagues out of my involvement. To my TNC family: I love you. All of you. Even if we differ in opinions. Each and every one of you is extraordinarily talented, from art work to musical taste to sheer cinema knowledge and writing ability. The things I’ve gotten to see and read… you guys make me smile. You make me feel like I’m part of something special, which is a feeling hard to come by in this wacky world we inhabit. I love you wonderful people madly, and I’m proud to stand by your side as we launch. To the ends of the Earth, comrades.

In honor of the site launch, I’ve asked the TNC folks to describe themselves. Ladies and gents, here are some of the wonderful people with which I work, in their own words, with commentary by yours truly…

Kieran Fisher – Master of Ceremonies, editorial type person and bearded man child. I’m responsible for overseeing the online written content, recruiting peeps, whoring us around like some sort of pimp that looks like a werewolf, contributing pieces and fattening you all up so I can sacrifice you to the cannibal witch that resides in the internet. (Author’s note: Kieran is a masterpiece. We need to clone Kieran and put him at the four corners of the world. He would totally stall the four horsemen.)

Simon Bryant – Made a website, hopefully it doesn’t break. (Author’s note: Simon worked incredibly hard. We owe him our asses. I highly doubt the website will break because he’s just awesome like that.)

Jerome Reuter – Experimental filmmaker & Italian horror nerd. I’m going to be reviewing all things horror related with the website, as well as delving into the many aspects of the world of Hellraiser. (Author’s note: Jerome is a good filmmaker. Plus he likes music that is way cool. Always trust someone with good taste in music. Always.)

Lucas Wagner – Makes bloody shitty short films, likes all the movies (blessing and a curse), way too into slasher films and fairy tales, resident Rooster Teeth fanatic. (Author’s note: Lucas is awesome. He is the spirit of adventure. Never lose your sense of adventure, people. He also gets excited over stuff the way I do, so there’s the whole kindred spirit thing.)

Joseph Perry – I write about current horror films for other sites and magazines, so I look forward to getting my other-than-current-horror-films ya-yas out at That’s Not Current. This will likely include loads of different styles of films, golden and silver age comics, ye olde tyme radio shows, music of both the rock and rawk varieties, and other assorted whatnottery. I have also passed the pop culture writing genes on to my son and occasional writing partner Cohen Perry, who is a fellow TNC contributor. (Author’s note: Joseph has the best taste in foreign horror. I’d kill to get my hands on some of the stuff he gets to watch. He also understands good comics and is an all-around cool guy; that translates into his work.)

Philip Hayton – At some stage of my life, likely around the time when things like exams started to become important, I drifted from normality and ended up developing an interest for everything unimportant. That last statement is something of a contradiction, as I would make the argument that getting to the third disk of Final Fantasy IX is far more important than achieving good grades for maths. This is a trend that started to follow me through the rest of my developmental years; having Alien marathons instead of house parties, binge watching anime instead of dates, recollecting my childhood games and most importantly, slacking off at University by fantasising about having a website that encompasses all of the above. My name is Phil and we have somehow managed to make an idea that was originally an amatuer fantasy co-created with Kieran during a history seminar into a reality. By complete chance we have managed to kickstart the website we always hoped for, with a great deal of help and sensibility from our friend Simon (we are similar to the Powerpuff Girls). What I am really trying to say in this short blurb is that I am honoured that people actually believe in the power of a delusional group of nerds ideas and I thank anyone who helps the website grow into a earth controlling organisation… I mean successful platform for geeky journalism. (Author’s note: at the risk of using a double negative, Phil’s interests are NOT unimportant. They are very important. His taste in video games and cartoons rocks the hizzouse. As one-third of the triple threat of admins, he makes people feel welcome and needed. That’s a great combination.)

There are many more writers; these are but a few. Again, so very honored to be working with them. We hope you like our show.