Warning: count(): Parameter must be an array or an object that implements Countable in /homepages/45/d96662078/htdocs/clickandbuilds/TheBackseatDriverReviews/wp-includes/post-template.php on line 316
↓
Home→fatherhood→The Way I Show My Love: Fatherhood in The Red Violin

François Girard’s 1998 film The Red Violin is gorgeous. It has an incredible score, a story that spans multiple centuries, and a tremendous cast that emotes perfectly despite linguistic barriers to the audience. Really, how can you hate on a film that has four different languages going for it? Curiously, this film also manages to strike yet another gorgeous chord: its statement on fatherhood and the intention of a musical gift. By comparing the circumstances and outcomes of Nicolò Bussoti (Carlo Cecchi) and Morritz (Samuel L. Jackson), we can more closely glean the heartfelt priorities in regard to the evolution of the father figure. 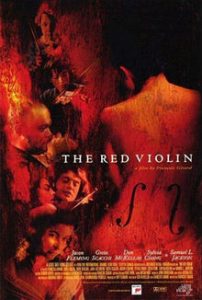 My love affair with this film continues.

Bussoti’s version of fatherhood is equated to control. He does not even entertain the idea that his wife Anna (Irene Grazioli) could be carrying a daughter; he has already made up his mind that the child is a boy. His approach to impending parenthood is rather even-keeled, which is in direct oppostion to Anna’s neurotic take on the birthing process. Anna is terrified of giving birth: she feels that she’s old to be having a baby, and she’s concerned that the birth process will be drawn out and painful; to help ease her mind about the impending birth, she receives a tarot reading from Cesca (Anita Laurenzi), who tells her of an incredible journey. Bussoti is indifferent to this, dismissing her nerves during a visit as the ramblings of a servant, drawing an obvious class line in between his opinion and Cesca’s practices. He explains to Anna, “I have an excellent midwife, an astrologer, a doctor. They’ll all be there. It will be perfect.” For Bussoti, there is no other way: he has already mapped out the permutations, and so the birth will go off without a hitch because he says so. He also declares that his son will be a musician. Upon presenting the unfinished violin to Anna, he tells her, “I made it for our son, Anna. Our son will be a musician. He will live for music. He’ll bring us pride and beauty to the world, my love.” For Bussoti, the violin is a “masterpiece,” and he slips the message, “With all my heart” into the body of the instrument. In this act, he passes down what he feels to be perfection and passion to his child: the baby will be a boy, the birth will go just fine, and his son will be a musician that is worthy of weilding the most perfect instrument ever created. It’s all been mapped out and planned. 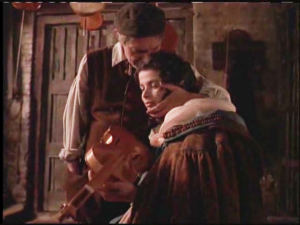 Yeah, hate to break it to you dude, but your birth plan isn’t going to work.

Morritz, on the other hand, appears to be an absentee father, though once his intentions are made clear, his brand of fatherhood is seen in an entirely different light. Morritz is obsessed with his work, much like Bussoti, but it is the obsession of finding the perfection that is the legendary Red Violin rather than the drive to create something new. Morritz frequently misses phone calls from his wife, and the audience can deduce that this is not going to make him popular at home. However, we get an inkling that he’s a caring father with a greater sense of purpose: he asks Evan Williams (Don McKellar) if he has children when the pair authenticate the identity of the violin. Evan totally misinterprets this question, and delves into a speech about what he’d do with the violin: “Take it apart. Find out how it works.” From then on, we get to see Morritz the researcher go into paternal protective mode: he shields the possibility of Evan subjecting the violin to any damaging testing, and he dissuades the boorish Ruselsky (Ireneusz Bogajewicz) from claiming the piece outright. Ruselsky doesn’t recognize the beauty of the instrument and is easily redirected, proving that he desires the notoriety of the instrument rather than the pure sonic perfection and beauty of it. Morritz, though, has a complete appreciation for it, calling it, “[t]he ultimate thing, as I see it. A perfect marriage of science and beauty. Impossible thing.” It leads Morritz to take a final protective measure to prevent it from becoming the artifact of a conceited musician: he swaps it out and brings it home to his own daughter, to whom he lovingly speaks on the phone as the violin’s journey ends.

Ultimately, the purpose of the violin is made clear: it was meant to be used for a child, and its perfection should be noted as such. Bussoti failed on multiple levels in this respect: he attempted to control nature, which is something that cannot be done in regards to childbirth, and in the complication of maternal and child death, he lost sight of the true intention of his instrument. While he poured his heart into making a perfect instrument for his son, Bussoti did not account for the idea that things could go wrong, and so he trapped the essence of his wife in this instrument. In a sense, it became their everlasting child: created by him, it was wrapped in her; both contributed material to synthesize this piece. Morritz, on the other hand, recognized not only the perfection of the violin, but its purpose. It was not meant to be played by an arrogant performer; it was meant to be the gift of a beloved child. It was meant to be a thing of beauty, passed on to the thing that you deem most precious and perfect in this world: your offspring. Bussoti’s ultimate creation was meant to rest in the hands of your own ultimate creation; after all, we want the best for our children, because to us, our child is perfect. It makes sense that a master violin maker would want to give his child the best, and it makes even more sense that the violin could not rest until it fulfilled its original purpose. 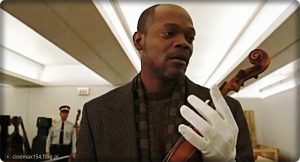 Beats the shit out of any Barbie any day of the week.

At one point, Morritz asks, “What do you do when the thing you most wanted, so perfect, just comes?” If you are a father, you know that your child is the most perfect thing that could arrive. And when that perfect thing that you wanted more than anything arrives, you give it the world as best you can. One sonically perfect violin at a time.