Warning: count(): Parameter must be an array or an object that implements Countable in /homepages/45/d96662078/htdocs/clickandbuilds/TheBackseatDriverReviews/wp-includes/post-template.php on line 316
↓
Home→Children→The Guy That’s There: The Importance of the Step Dad in Ghostbusters II

Bill Murray is one of my favorite smart asses. I know he’s difficult on set and off-screen (which is fact, not excuse). I still find him hilarious in the right role. One such film that highlights his abilities as a consummate smart ass is Ghostbusters II. The off-handed jokes about the end of the world? Classic. Hidden in that film, though, is something much more powerful than the ability to conjure a laugh. Something that warms the heart and shows us what having an open, unquestioning mind will do. You see, Ghostbusters II also gives us a fantastic example of the kind of guy some of us are lucky to know: one hell of a stepdad. We get a chance to see someone who starts out with the sole intention of romancing a single mother, then goes to bat for her child, and respects the relationship between mother and child enough to smash perceptions of the stereotypical resentful stepdad. 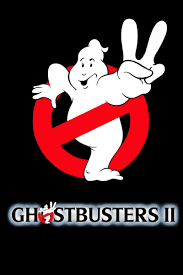 Murray’s Peter doesn’t start out as a loving stepfather type. When he and Dana (Sigourney Weaver) meet up again after the events of the first film, we find out that not only has their relationship crashed and burned, but Dana has married, had a child, and divorced. He’s not exactly nice about summing up her recent experience: he refers to her as being “ditched” by her ex-husband, then starts arguing about why their relationship failed. There are undertones of curiousity to see if the relationship could be reignited, but at this point, the fact that Dana has a baby is ignored as he lays on the moves. In fact, his non-verbal reactions to first meeting baby Oscar are far more hostile than opened-minded. He rolls his eyes and turns away when he sees the baby, choosing instead to go horse around with Dana’s cello rather than interact with him. When he does regard the child, he’s handed a container to collect a stool sample at the behest of Egon (miss you, Harold Ramis). The association is subtle yet indicative of his attitude: Peter’s first interaction with Oscar is expected to revolve around shit. This doesn’t look promsing.

And yet, when given the chance to interact with Oscar, Peter maintains his sarcastic personality while adding layers of softness and depth. His first words to the baby are accompanied by a smile: “Do you want to play with a big kid?” This shows a type of equality: deep down, they’re both kids that are just going to have a good time together. He quietly tells him, “You know, I should have been your father. I could have been.” That must have been a difficult pill to swallow: looking at the baby of The One That Got Away and staring his past relationship mistakes in the face. By all means, Peter has potential to dislike this child because he’s biological proof that Dana moved on. Instead, though, Peter shakes his Oscar’s hand, picks him up, and begins to play. He’s still sarcastic and hands off the business of the stool sample onto Dana, but he makes it clear that he doesn’t have any ill will toward this child; Oscar is not somehow competition or a reminder that his relationship with Dana failed. He’s kind; he jokes around; he makes his intentions known that he’d like to pursue Dana, but he accepts that they’re a package deal. After all, when the goo attempts to abduct the baby in the bathtub, Peter tells the scared mother and crying baby, “You’re all safe now.” He doesn’t tell Dana that she is safe; he makes sure to include Oscar. “This is your place now,” he tells the boy after wrapping him up in a treasured sweatshirt from Joe Namath. He continues to wisecrack (“You’re short, your belly button sticks out too far, and you’re a terrible burden on your poor mother.”), but he doesn’t do so maliciously. He shows respect to Dana by not pressing sleeping arrangements in a sexual manner; it demonstrates respect to her and her child, so that they may rest after a trauma rather than forcing the woman into a type of shelter-for-sex barter.

There’s no pissiness here, which is nice.

It’s this willingness to not only interact with Oscar, but to keep him safe, that translates heavily into the climax of the film, marking Peter as a devoted, safe place for the little boy. When our gang bursts into the museum to save the day, Peter immediately greets the baby, then places his hand over the child’s head in a protective fashion while holding him. He refers to himself as “Uncle Pete” when telling the child that he has to help free Dana. And when Dana pleads with the immobile group to do something to save her child from demonic possession, Peter is the one that does something: unable to move, he begins to verbally taunt Vigo, referring to him as “the bimbo with the baby” and criticising the fact that he didn’t choose someplace sunnier like California to begin his world domination. When he has no physical way to fight back, Peter tries a stalling tactic meant to buy time to save Oscar. He’s punished with a zap from Vigo, but once he’s able to move, his first movement is a dive to stop the dropped child from hitting the floor. It’s not to run to free Dana: it’s to help Oscar. Ladies and gents, this is the making of a good stepfather. He refers to himself as “Uncle Pete” so that he respects that Oscar still has a dad that he may very well love someday; he doesn’t seek to usurp that affection. He doesn’t try to displace the child in the affections of his mother, nor does he roll his eyes at the baby constantly and act as though he’s a burden. Nope. When shit gets real, Peter is there to make sure that someone is there to catch Oscar. 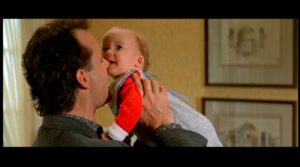 You wouldn’t think that a family film about sarcastic ghost hunters trying to save the world from a supernatural apocolypse would have much to say about stepparenting dynamics, yet here we are with a shining example of a positive male role model who is not the biological father. Is Peter sarcastic? Yes. Is he a slob? Absolutely. Is he willing to break through a wall of slime for the woman he loves and the baby boy he’s made clear is close to him as well? Oh hell yes. We need more Peters in the world.