Warning: count(): Parameter must be an array or an object that implements Countable in /homepages/45/d96662078/htdocs/clickandbuilds/TheBackseatDriverReviews/wp-includes/post-template.php on line 316
↓
Home→fatherhood→Weekend Movies: Five Reasons to Watch This Is My Father

This Is My Father is almost 20 years old. It came out in 1998, a product of the Quinn brothers: actor Aidan, writer/director Paul, and cinematographer Declan. This film… I tell you, this film can reduce me to tears like no other. I say from time to time on this site that films make me cry, but this one… Jesus Christ, this film is so unbelievably moving that it will destroy me for days, particularly with one speech that Aidan Quinn delivers (really, it’s everything you’ve ever wanted to hear from the person you love most in the world). It’s the story of Kieran Johnson (James Caan), an unhappy English teacher who travels to Ireland with his wayward nephew Jack (Jacob Tierney) to learn the story of his parents, Kieran O’Dea (Aidan Quinn) and Fionna Flynn (Moya Farrelly). It will make you want to hug your dad.

Fiona and Kieran are a mismatched couple. She’s a fiesty 17-year-old on a school break. He’s a shy farmer, an orphan who still lives with his elderly foster parents. Everyone objects to these two falling in love, yet it happens anyway. And you love them together. You really want them to be together. Farrelly and Quinn have great chemistry; they have what so many films fail at.

#2 – The pain of an absent father figure

Modern-day Kieran Johnson has grown up without a father, not knowing who is responsible for half of him. We get to see the full effect of just how deeply this impacts him. Caan does a great job portraying a man that feels a gaping hole, in everything from his vocal tone to his facial expression. I knew someone once whose mother refused to tell him anything about his biological father; Caan’s Kieran is a mirror of what I saw when this young man described the feelings of abandonment. It’s effective and spot on. 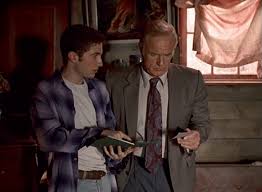 Like it or not, the absence is there, and it’s felt acutely most of the time.

Jack, who also does not have a father figure in play, goes to Ireland with his uncle as a way to take a break from a troubled life. While there, he meets a young woman his age and falls for her. It’s a sweet and hopeful story, a breath of young love in midst of a sad love story.

This film is fucking beautiful. There are no two ways around it. The rich greens of the hills, the blues of the ocean. Even the darkness of Fiona’s home that she shares with her alcoholic mother is strangely beautiful. This film is absolutely lush. You will fall in love with the scenery. 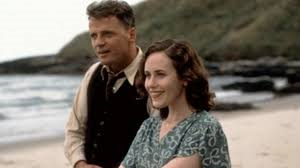 Falling in love on a beach in Ireland. Beauty.

I don’t care how you get your hands on this. Just watch it. It deserves to be seen.