Warning: count(): Parameter must be an array or an object that implements Countable in /homepages/45/d96662078/htdocs/clickandbuilds/TheBackseatDriverReviews/wp-includes/post-template.php on line 316
↓
Home→Uncategorized→Tonight She Comes (2016)

From the opening credit, informing that the film should be played “Loud…. As Hell” writer/director Matt Stuertz set the tone of this film perfectly. We initially follow James, a new postman looking for an address in the middle of nowhere with his stoner buddy. When James arrive at this house it appears to be deserted, suddenly he meets 2 girls looking for their lost friend. Things go south. I won’t spoil any more of the plot as this is really a film that works best if you go in cold. It leads the audience in by being very light on narrative. However, as it goes on, the plot becomes much more focused, making things darker, stranger and bloodier, leading to a conclusion that will leave you as puzzled as you are queasy in the best possible way. 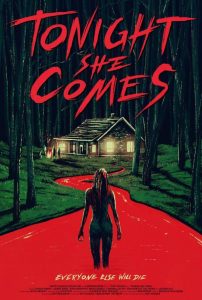 The score composed by Wojciech Golczewski gives the whole thing a very Carpenter flavour. Specifically, Halloween, as you have the main characters being stalked in POV shots while a synth score brilliantly builds the tension.

A lazy comparison of this film would be to stack it against Ti West’s House of the Devil, as both are 80’s throwback films. However, where West’s film is literally set in the 80’s, Stuertz’s film is very much modern day but with all those 80’s tropes. They differ greatly in that West relies on a simmering narrative leading to a crescendo, whereas Stuertz is firing out wtf moments every 5 minutes. It’s the difference between early and late 1980’s films. Early 80’s was built on the idea of letting dread build; the later 80’s threw everything at the screen with subtly of a Riki-Oh punching a guy’s brain out.

If you’re a horror fan, specifically of the splatter/gore school, this film was made for you. As of right now it doesn’t have distribution but when it’s available spend 85 minutes on a very well constructed, visceral gore picture.