Warning: count(): Parameter must be an array or an object that implements Countable in /homepages/45/d96662078/htdocs/clickandbuilds/TheBackseatDriverReviews/wp-includes/post-template.php on line 316
↓
Home→Adaptation→Travel in Pairs: Surrender Versus Acceptance in What Dreams May Come (1998)

I’ve both read Richard Matheson’s novel What Dreams May Come and watched its 1998 film adaptation. Some side with Matheson and criticize the film’s significant plot changes and thematic exclusions, including an emphasis on New Age beliefs. Personally, I find value in both, though the film wins for me in terms of sheer emotion. It’s a film that consistently moves me to tears because it’s a positive view on something so many fear: death. The heavy emphasis on the relationships that transcend the end of life really sell the film, and I’ve heard it described as a statement on acceptance and moving on. Here’s where I disagree: I think it’s more so a statement on surrender and joining a loved one rather than blind acceptance. 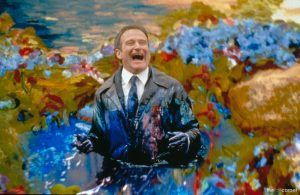 Have to admit, this version of Heaven is interesting.

To truly examine the concept of surrender in this film, we first must examine the pain associated with it. The notion of the inescapability of death comes twice for Annie (Annabella Sciorra, who conveys such a cornucopia of emotion): first upon the deaths of children Ian (Josh Paddock) and Marie (Jessica Brooks Grant), and then upon the death of her husband, Chris (Robin Williams). The losses are tremendous, and cause Annie to sink into a depression that culminates with a suicide attempt each time – the second of which succeeds. The loss of her two children shatters her to the point where she nearly loses her marriage to her soul mate: Chris explains that she can’t function out of a sense of guilt: “My daughter asked her to drive” the day of the accident that killed them, “but my wife believed that if she had been driving the kids, her protective instincts” would have saved them. Annie attempted to slit her wrists and wound up committed, where Chris left her with the choice of divorce or joining him in a life where she didn’t punish herself. When Chris dies, she doesn’t have that same pull to continue on, and chooses in her grief to end her corporeal suffering. This action lands her in her own version of Hell, a dark, cold place that appears to function on the same rules of forgetfulness and fear as dementia.

I don’t even want to imagine how horrible this feels.

The point of affirmation comes when Chris journeys into Hell to find her, with the hope of rescue. After locating Annie in Hell, Chris enters a dark replica of their home, hoping to appeal to her memory and deep love for both him and their children. Annie doesn’t bite until Chris decides to join her in Hell. He tells her that he forgives her, “for being so wonderful a guy would choose Hell over Heaven just to hang around you.” It’s his words that absolve her of her self-imposed blame over the deaths of her family members. It’s that act that ultimately reaches her – his act of choosing an eternity of pain and confusion to share in her grief. He does not abandon her, and he does not ask her to change; rather, he makes the conscious decision that if this is how it’s going to be, then he accepts it and elects to share that with her. “I’m sorry I left you,” he tells her in the memory that causes her to recognize him in Hell. Having been at the brink of giving up once, he takes the harder path of spiritual fidelity to his wife and elects to hold her hand when it gets tough. 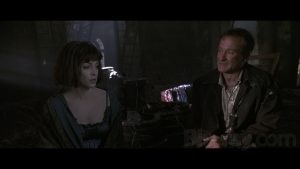 I’d sit in hell with my beloved too.

This is the crucial difference between the notion of letting go and the notion of surrender. Letting go implies that the individual completely releases all that ails them – it’s the act of giving up a painful set of circumstances which weigh upon you, or of walking into something with open arms. Surrender, in this case, implies something different: it’s knowing what you’re walking into and accepting the potential heartache. It’s sacrifice, with the knowledge that things will not turn out rosy – it’s going to suck. It’s the ability to say, “I don’t know where we’re going, but we go together… even if it’s difficult.” People speak of letting go in the sense of releasing that which causes you pain to step toward a brighter future. In the context of this film, surrender requires the knowledge that pain will result from this decision, as Chris decides to join Annie in Hell – an experience that will be decidedly unpleasant. It’s not the loss of the self, but rather the act of trusting and loving another person so much that you’re willing to subject yourself to unpleasantness to support them. If you’ve ever loved someone with depression and you’ve stuck by them even though you can’t take that away… you know this all too well. 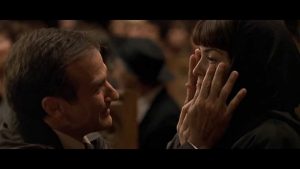 Oh this scene hurt so much.

That right there is the beauty of the film: the ability to join a loved one and truly empathize with them to glean their experience. We may not always agree with their vantage point, and we may want to run away at times. But in truly joining someone – giving up your comfort for the sake of their companionship – you come to know the true meaning of partnership. It’s not about lifting someone up all the time. Sometimes, it’s about learning the ugly parts that you’d rather not see so that you may bear witness to the true intimacy of their being. It’s surrendering yourself to the unknown rather than letting go of the pain. It’s seeing the whole human rather than the positives. It’s choosing to sit next to someone in Hell rather than return to Heaven alone. After all, Heaven cannot exist where those dearest to our hearts are absent.