Warning: count(): Parameter must be an array or an object that implements Countable in /homepages/45/d96662078/htdocs/clickandbuilds/TheBackseatDriverReviews/wp-includes/post-template.php on line 316
↓
Home→Comedy→Weekend Movies: Five Reasons to Watch Anchorman: The Legend of Ron Burgundy (2004)

Some weeks, you just need something that’s fun, regardless of any issues you can find with it. Such is the case with 2004’s Anchorman: The Legend of Ron Burgundy. The tale of the wild life, fall and resurrection of wild San Diego news anchor Ron Burgundy (Will Farrell), the film is full of laughs, sarcasm and wild scenarios. Here are five reasons to watch it this weekend. 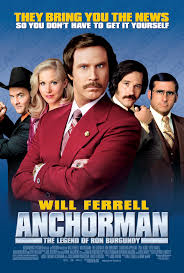 There is no decade greater for fashion than the 1970s. Yes, yes, the 1980s had some wild stuff in there, but COME ON. The 70s were obsessed with keeping waistlines to the north of the navel, and there were knitted cardigans and jumpsuits for everyone. It’s like Oprah’s Favorite Things, but with polyester and moustaches. If you want a flashback to give you giggles, go here. Or here. Or here. The point: 70s fashion is on full display here, and it is glorious.

#2 – Women in the workplace

Veronica Corningstone (Christina Applegate) is a successful female journalist in a man’s world. She’s got to face colleagues that don’t respect her professional abilities, cultural misconceptions that she can’t do her job, and a constant parade of dudes trying to get her into bed. If you’ve ever worked in a male-dominated field, you’ll groan a bit at her treatment, but you’ll also laugh at how Corningstone gets to handle it. She’s a hero. If I had a nickel for every time I wanted to nut-punch an overconfident guy trying to nail me at work… 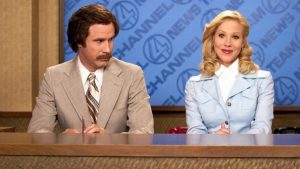 #3 – The newscast from hell

I edited a student news show in high school, and it was enough to put me off that kind of work professionally. The sheer amount of crap you must to wade through is enough to make your eyes water. Doing it live? Shit, I couldn’t fathom that. So when we see Brian Fontana (the never-aging Paul Rudd) have a newscast not go the way he wants it to, or Ron clinging to the teleprompter’s punctuation like his life depends on it, I can’t help but giggle because I’ve had to edit stuff like that out before. It’s sort of like Noises Off , but with a news crew. 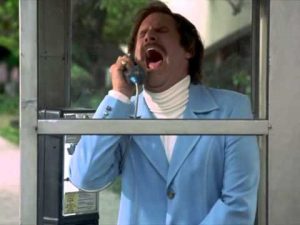 You’re hearing the quote in his voice.

Applegate is always a fun watch, because you can tell that around the late 90s/early 2000s time frame, she was getting sick of being the pretty girl who wasn’t expected to be anything else; that brought about some fun comedic roles on her part. Farrell is a good time for me, because he can take any statement and make it sound sincere (about 90% of Elf (2003) is carried by his deadpan, over-excited quality – and that’s not a complaint by a long shot). Also in the lineup: David Koechner, Steve Carell, Rudd, Fred Armisen, Ben Stiller, Tim Robbins and Danny Trejo. How can you not love a movie that contains Machete?! In all seriousness, though, this group continues to work well together because they play off one another’s strengths. Plus, the off-screen friendships shine through. You can tell that this group genuinely enjoys working together. When you spend that much time with your coworkers, getting along is so crucial; when everyone gets along, the best work comes about.

Anchorman: The Legend of Ron Burgundy is available on Amazon for rental or purchase.