Some of you may have noticed that there hasn’t been a Saturday Short for the past two weeks. There’s a simple explanation: the cold from hell turned into the cough from hell, and now I’m left with the bruised ribs from hell. It hurts to laugh and everything sucks. This llama is a pretty accurate representation of my current mental state. 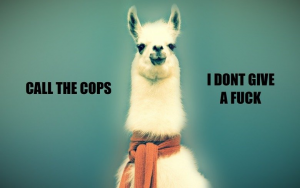 This week, I was hoping to do some stuff, but I just can’t bring myself to do so. The Fountain — which I’ve been meaning to cover for like a month — has fallen to the wayside yet again. I managed to go see John Wick Chapter 2, but frankly,I was underwhelmed by it, so I can’t recommend it in good conscience. Instead, you’re getting hit with an analysis of Death Proof and a recommendation for Rosemary’s Baby. Because we’re all about positivity, goddamn it.