Warning: count(): Parameter must be an array or an object that implements Countable in /homepages/45/d96662078/htdocs/clickandbuilds/TheBackseatDriverReviews/wp-includes/post-template.php on line 316
↓
Home→Comedy→Weekend Movies: Five Reasons to Watch Bubble Boy

I’m not always into high-brow stuff. There are some days where I need a laugh, and the cheaper they are, the better. Enter 2001’s Bubble Boy, which came out the same year that Jake Gyllenhaal headlined Donnie Darko. This film didn’t do so hot at the box office, but honestly… it’s a good time. I still laugh at it. It’s available on Amazon for rental. Here are five reasons to watch it. 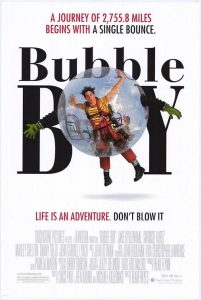 It’s a road trip rom-com with a twist: Jimmy (Gyllenhaal), a boy without an immune system, is in love with his neighbor Chloe (Marley Shelton, aka Dr. Dakota Block from Death Proof) and wants to stop her from marrying her douchey boyfriend. Thus, he builds a suit to embark on a road trip to stop her, meeting a circus sideshow, a fun biker (Machete himself, Danny Trejo), a gaggle of drunk Asian businessmen, and an old pilot with a poorly-named love interest. Offensive? At times. But it’s fucking funny in that it catches you off guard. That in and of itself is worth it. I can’t hear the words “500 dollars” without giggling.

We’re used to Serious Actor Jake Gyllenhaal in movies like Nightcrawler, Brokeback Mountain, and Enemy. We’ve seen him as cult artsy icon/indie darling in Donnie Darko and The Good Girl. We’ve even seen him do action hero in Prince of Persia and Source Code. Dude’s comedy resume is lacking a bit though. Bubble Boy is a nice reminder that he can be really funny when he chooses to do so. It’s in his winsome smile and niavete for this role: he’s so wide-eyed and apple pie that he doesn’t realize how ridiculous everything is around him. It’s a beautiful reaction, and I’d love to see him do more roles like that. 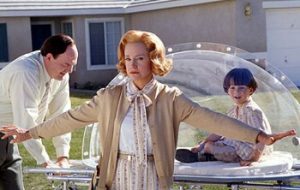 Take it away, Swoozie!

We’ve either had one or met one that’s as bad as Swoozie Kurtz’s Mrs. Livingston. Making your child say the Pledge of Alleigance to get his boner to subside? That’s special. Giving him Highlights Magazine and limiting his television viewing to The Land of the Lost? That’s kind of cruel. Really, it’s no wonder he didn’t go nuts and try to kill everyone. Worst part is that we’ve all met that mom that has unrealistic aims to keep her child a dependent baby. It’s easy to understand why a mom would go off the deep end when she wanted to protect her baby, especially if said baby has a health issue that proves life-threatening. However, the cord needs to be cut sometime. Kids grow up, and as a parent, it’s up to you to process and let go. In the meantime, though, we can learn through her overreactive example.

Oh this is good. Blink-182 meets the Beach Boys. Really, I can’t image anything other than Jakey boy running around in his underwear when I hear the song “Wouldn’t It Be Nice”. And the song “Wildfire”? It will take on a whole new meaning for you. Really, it’s going to warp some good songs for you in the best way possible.

Sticking out of the crowd can be a tough one, and pretty much everyone that is reading this has felt like they don’t belong somewhere at some point or another in their lives. Jimmy’s dedication to going outside of his boundaries for someone he believes in is a nice message concerning love: sometimes, we meet someone that makes us want to take that leap. Doesn’t matter if you think you’re too dorky or that some other aspect of yourself rules you out. Take the leap. Get in the suit. Have an adventure.

As a word of warning, this one has some off-color jokes. If you struggle with stuff like that, you might want to skip it, but if not… game on.