Warning: count(): Parameter must be an array or an object that implements Countable in /homepages/45/d96662078/htdocs/clickandbuilds/TheBackseatDriverReviews/wp-includes/post-template.php on line 316
↓
Home→Comedy→Weekend Movies: Five Reasons to Watch Elf

I have a rule around my home concerning Christmas: nothing Christmas-y until after Thanksgiving. If I spot one string of lights before the fourth Friday in November, I will drop kick my shit across the room and erupt into a scream that will terrify adults and children alike. Now that we’re past that point, we can embrace the Christmas season. Which means that there’s a classic we’re going to cover. Kids, grab your maple syrup and spaghetti. Here are five reasons why we’re watching Elf this weekend.

You know what’s a good feeling? Watching someone get incredibly excited for anything. It can range from spotting a bag of candy to seeing a special person to the extreme enthusiasm for having a good day. Is Will Farrell’s Buddy exhausting? Christ yes. However, you can’t deny that it’s infectious and smile-inducing. The world would be a far happier if people got as excited to see one another as Buddy does in his life. That’s a nice lesson to take away. 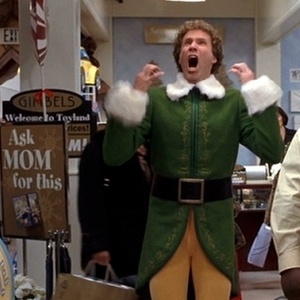 I am not a big singing person. Musicals and I aren’t close friends; there are blessed few that I can tolerate. I used to hang out with people that loved musicals (curses, theatre majors!) and therefore sang at the drop of a hat. It was obnoxious. As a result, singing in movies grates on me in a way that most people will not understand. Not this film, however. Zooey Deschanel can sing any time she wants. I don’t care how much she gets ripped on for being the Manic Pixie Dream Girl. Her voice is beautiful and she can sing any time she wants.

What Christmas film is complete without a gag concerning the four horsemen of the apocolypse? They’re out to get Santa. The four horsemen are pissed at Santa Claus and want to stop him at all costs. If that’s not a metaphor for life, I don’t know what is.

Sad fact: there are a lot of step parents out there that just don’t want a thing to do with the children that marry into the family. Those kids can get treated like an unwanted vegetable side dish at dinner, and it’s not right. Even worse, it’s perpetuated in films that all step parents hate their step children, which leaves little room for a portrait of how it should be. So when we see Buddy’s stepmother Emily (Mary Steenburgen), we’re thrilled. This is a woman that opens both arms, offers a smile, and does whatever it takes to show her support. She doesn’t care that Buddy dresses like an elf; in her mind, she has a responsibility to this person, and she not only makes an effort, but comes off as extremely supportive and marvelous. We need more Emilys on film. 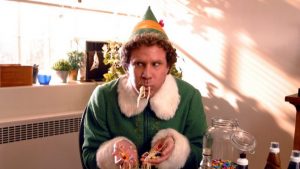 Anyone who makes this meal and allows it to be eaten is a friend of mine.

#5 – The happiness of children

There are points of this film where director Jon Favreau brings it back to the kids, and it’s beautiful. So often, we get caught up in what to buy, how much to spend, and how many presents are under the tree that we forget to think about the magic of the holiday. We forget that when we’re little, this season is filled with the possibility that something fantastic is going to swoop in. Suddenly, the air is more full, the smells are crisper, and there’s hope that a dream can come true. Kids from all walks of life feel this. It’s nice to see children get represented here as the ones that get that magic. Maybe we should be more like them.

In honor of kicking things off right, stick with Elf this weekend. Then go hug someone and take a deep breath.