Warning: count(): Parameter must be an array or an object that implements Countable in /homepages/45/d96662078/htdocs/clickandbuilds/TheBackseatDriverReviews/wp-includes/post-template.php on line 316
↓
Home→Adaptation→Weekend Movies: Five Reasons to Watch Everything Is Illuminated

2005’s Everything Is Illuminated is a film that manages to baffle me. On one hand, it’s excellent. On the other hand, everyone I mention this film to looks at me like I’ve sprouted an extra head and goes, “Is that the one where Elijah Wood is wearing the cloud glasses?” That’s the cover art, genius. The film lost money despite that it was a small, modestly-funded film to begin with. Which is a damn shame. Here at The Backseat Driver Reviews, we believe in second chances. So here are five reasons why you should watch it this weekend.

I know, I know – it’s not nice to laugh at someone’s broken English. Especially as I probably sound absolutely ridiculous when I speak German, and completely drunk when I speak Russian (I really need to brush up). However, this film has such a deadpan presentation of the Ukranian Alex (Eugene Hutz, who is goddamned perfect in this movie) that you can’t help but laugh. It’s a reminder that even though you might be using the correct terms, it doesn’t always translate well. It’s nice to laugh every so often because life is too serious. It’s even better when you have a sense of humor about yourself. That’s very premium.

Major plot point of this film: Jonathan (Wood) goes to Ukraine in order to find a woman who saved his grandfather from the Nazis in World War II. This woman made it possible for his grandfather to escape to America and found his family; in essence, he owes her his existence. And so Jonathan uses a man (Boris Leskin) to locate the town that was wiped off the map during the war, accompanied by the man’s grandson Alex as translator. Watching the heaviness of this quest in contrast with the quiet manner in which it’s treated… the purpose is never forgotten. It’s moving to think that years from now, something you did would mean that someone owes you their life. It’s enough to give you pause. 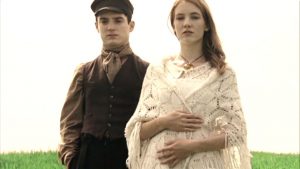 One photo kicks this off.

Schreiber is one hell of an actor; one of my favorite roles of his was as the hurt and humiliated husband in A Walk On The Moon. That talent translates behind the camera as well. This film was his directorial debut. I’m not sure why he hasn’t directed anything other than a few episodes of Ray Donovan since then – perhaps it was the poor box office performance of this film. Don’t let that fool you. Schreiber has the stuff. He’s a lot better than some of the guys out there. He wrote this screenplay adaptation from Foer’s book, too – it’s a more ample argument that someone needs to let this guy direct more.

It’s based on a Jonathan Safran Foer novel. I’m not going to get into what was included and what was left out. I will, however, talk about the style. The book has a dual narrative: one part focuses on the past, in the shetl of Trachimbrod, while the other follows Jonathan as he tries to hunt down his family history. Foer brought up an uncomfortable fact with his novel: some towns and the people that inhabited them were literally crushed off the map during the second world war. There are critics to the book’s approach, though – don’t doubt that. So what better way to settle the argument than to pick up a book and make up your own mind?

What’s most striking about this film is the fact that you’re attached to everyone within it. From the bitterly angry grandfather to the over-eager Alex to the perennially quiet Jonathan, you like everyone. You laugh with them. You cry with them. You want to tell them that it will all be okay. And in the end, you feel better for having known them. It takes a lot to get an audience that attached to characters where you think fondly of them long after the fact. That’s equal parts actor performance, direction, and screenwriting. 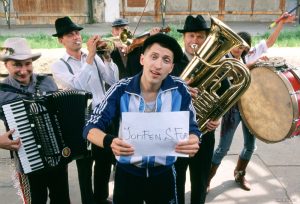 This all sounds really serious, but I promise you that it strikes a good balance. Try it on Amazon this weekend.