Warning: count(): Parameter must be an array or an object that implements Countable in /homepages/45/d96662078/htdocs/clickandbuilds/TheBackseatDriverReviews/wp-includes/post-template.php on line 316
↓
Home→Comedy→Weekend Movies: Five Reasons to Watch Grumpy Old Men (1993)

Thanksgiving was yesterday, but that’s not going to stop us from finding a film that covers that holiday. Wait, it’s not just Thanksgiving – it’s the snowy atmosphere and companionship factors. What better way to celebrate that aspect than with an old person who doesn’t really care about social nicety? That’s where Grumpy Old Men (1993) comes into play, a film about the rivalry between aging neighbors Max (Walter Matthau) and John (Jack Lemmon) that escalates when foxy Ariel (Ann-Margaret) moves in. Here are five reasons to watch it this weekend. 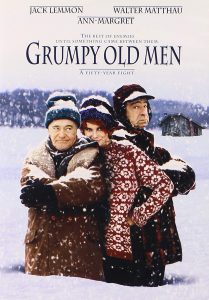 Listening to two people trade barbs with one another is always amusing. When it’s two men of advancing years with straight faces, it’s even better. Thus, we get exchanges like the following: “Morning dickhead.” “Hello, moron.” It doesn’t matter if it’s Matthau or Lemmon speaking – it’s funny as hell to see two little old guys – who we want to think are beacons of maturity and wisdom – acting like two teenagers who want to see the other in discomfort. Given, they’re not heartless, but there’s enough there to make it interesting. Which is perfect: light-hearted, yet hilarious.

Call it the Sophia Petrillo effect, but the older someone is, the funnier they are when they say something without filter. Burgess Meredith plays Lemmon’s father, a man who clearly ran out of shits to give about anything and everything. He loves bacon and beer. After a certain point, when you get to that age, you’re allowed to do what you want. He is old age goals. Bonus: the outtakes at the end credits. They’re worth sitting through the whole movie. 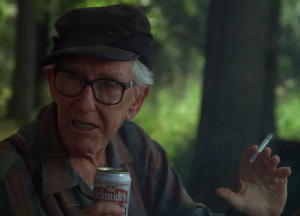 #3 – The transition from parent to child

This film manages to address the reality of having an aging parent. Often, the child must become the parent: making sure the parent goes to the doctor, eats right, pays bills, and so forth. We see a few different iterations of this dynamic: John and his daughter Melanie (Daryl Hannah), John and his own father, and Max and his son Jacob (Kevin Pollak). Seeing multiple instances gives the audience a greater appreciation as to this rite of passage. If you’re currently going through this stage of life with your own parents, you’ll feel it’s a bit more universal, which is comforting.

Watching Max and John fight over little things is funny, but this film also gives you a chance to see where the insults started. We see some very old hurts get reflected in the (then) present day, threatening to repeat themselves all over again. It serves as a good reminder to deal with this stuff as it happens rather than let it fester. That’s always a nice message this time of year. 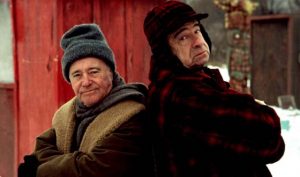 Can I be Ann-Margaret once I reach my 50s? I’d really like to look like that. She conveys grace and a vivacious lust for life that I hope I carry into middle age and beyond. It’s wild to think that Lemmon had a good 15 years on her, proving that there was age disparity even back then, in a film designed to make us think about getting older. Goes to show you that the definition of “old” changes as time goes on.