Warning: count(): Parameter must be an array or an object that implements Countable in /homepages/45/d96662078/htdocs/clickandbuilds/TheBackseatDriverReviews/wp-includes/post-template.php on line 316
↓
Home→Action→Weekend Movies: Five Reasons to Watch Kung Fu Hustle

By now, you have figured out that I have a slapstick sense of humor. Someone getting whacked in the face – with a foot, a chair or a 2×4 – is always a sure bet to get me to belly laugh. So does it not surprise you that I love Kung Fu Hustle? It should not. Not in the least. In honor of wanting to laugh, here are five reasons why you should watch it this weekend. 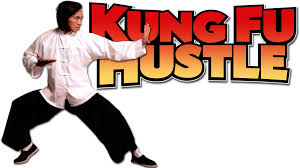 I love this film so much.

Chow is really, really funny. He was gifted with two impressive abilities: the ability to make an over-the-top sad and/or “oh shit” face, and the ability to pull a deadpan performance. While I excel at doe eyes (to varying degrees of success), I simply cannot pull off the ability to keep it together when I could be giggling. Being able to alternate between the two extremes helps Chow in this film, and only adds to the comedic impact.

Again, see my statements above concerning physical comedy. What’s great about Kung Fu Hustle is that it’s not only slapstick, it’s completely cartoonish. There are moments where appendages are bent painfully out of shape, or something that should have killed someone is dropped on his or her head. Yet no matter what the injury, it’s walked off (for the most part). Lather, rinse, repeat. It’s a lot of fun to watch how ridiculous it can get.

The image does not do that chase scene justice.

Don’t let the light-heartedness of the film fool you: the fight sequences are fantastic. They’re expertly choreographed, to the point where each movement appears fluid and effortless. Yes, there are some superhuman abilities in the jumping and kicking department, but you will not care in the least about reality. It’s awe-inspiring.

Chow’s Sing in the main character in all of this. At the beginning, he’s not the best guy on the block. He’s desperate to join the Axe Gang, a local group of thugs. He’s a dishonest con man that loves to pick a fight. He’s also plucky as all hell and pretty scheming. However, you still wind up liking him. At first, you love his misfortunes, but by the end, you dig Sing. It’s a cool evolution of character.

It’s screwball. It has action scenes and memorable characters (my favorite: Rabbit Tooth Jane). It also tries, in the end, to be a good person, as much as a film can. We get to see that there aren’t always black and white tropes when it comes to people; sometimes, good people make bad choices and need to find their way again. That makes the themes more relatable. It’s a good reminder for the rest of us that there’s something good in all of us. 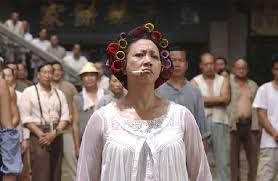 Love me some Landlady.

This really is the perfect way to spend a weekend. So throw in some curlers, have a highball, and kick back with this one.