Warning: count(): Parameter must be an array or an object that implements Countable in /homepages/45/d96662078/htdocs/clickandbuilds/TheBackseatDriverReviews/wp-includes/post-template.php on line 316
↓
Home→Action→Weekend Movies: Five Reasons to Watch National Treasure (2004)

Sometimes, a theme presents itself so subtly that you wonder why you’ve never covered a certain movie at a certain time before. Why, oh why, have I never covered National Treasure (2004) during the lead up to Independence Day?! This year, we’re not going to let an opportunity slide. Nope. No sir. We’re grabbing all of the books on the Knights Templar, making an extra large popcorn, and hunkering down for a long weekend with everyone’s favorite treasure hunting film. Here are five reasons to watch it this weekend. 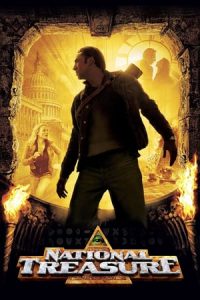 Okay, so he doesn’t die in this one (14 years is well outside of the statue of limitations on spoilers). However, over the years, it’s happened so many times that we’ve come to expect it. It’s a reflex now. We’ve been trained like Pavlov’s dogs. Some people blink when someone jumps at them. Others clap with glee when they see Señor Bean onscreen because they think carnage is coming. The two are not mutually exclusive, so it’s nice to be surprised once in a while.

I’m a girl. I’m proud of this fact. While I may not be the most fashionable thing on the planet (I’ve surpassed yoga pants and just head straight for pj bottoms at this point), I do appreciate a nice ensemble. Diane Kruger is a model, and the costume department capitalized on that fact. She looks pretty great, even when she’s just in jeans and a really cool jacket. Dammit, for one day, I’d like to look effortlessly awesome.

Diane can look nice in my stead.

If anyone is stealing the Declaration of Independence, it’s Cage. Van Damme couldn’t do it. Nor could Bruce Willis. Tommy Wiseau? Eh, we’ll just give it to him – he could use the win (and some people think he’s secretly D.B. Cooper, so there’s that). Cage has the perfect blend of cool guy and complete weirdo to pull this stunt. And it works.

If there was ever a group of people that were going to have a movie made about them based on their names, it’s this bunch. Ben Gates. Ian Howe. Riley Poole. Abigail Chase. I mean, Jesus, we are one Jack Montana away from a Robert Wagner cameo. If ever there was a movie for Dr. Christmas Jones, this is it.

With a name like that, it’s doubtful he’d grow up to be an accountant.

#5 – The director is also doing The Meg

Jon Turteltaub directed both this film and the 2007 sequel National Treasure: Book of Secrets. He also gave us While You Were Sleeping (1995), Cool Runnings (1993), and your favorite and mine, The Sorcerer’s Apprentice (2010). This summer though… we’re getting The Meg. Jason Statham versus a giant shark. If National Treasure is any indicator, we are going to have some fun this summer. I cannot wait.

National Treasure is available for streaming on Netflix.