Warning: count(): Parameter must be an array or an object that implements Countable in /homepages/45/d96662078/htdocs/clickandbuilds/TheBackseatDriverReviews/wp-includes/post-template.php on line 316
↓
Home→Comedy→Weekend Movies: Five Reasons to Watch Scary Movie

Can you believe that Scary Movie is 18 years old? This movie is going off to college in the fall. It’s got its license and can buy lottery tickets. This movie can join the armed forces if it wants to. That blows my mind, because I remember when it was ripping on the new 1996 film Scream. Both were a part of my adolescence/young adult life. Which is why you should revisit it. Here are five reasons to watch Scary Movie this weekend. 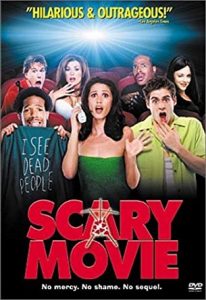 Rewatching Scream, it’s, well, kind of dated. It was penned by Kevin Williamson right around the time he subjected us to Dawson’s Creek. (Sidenote: I kind of love the meta direction James Van Der Beek’s career has taken, so I’m thankful for that at least.) It was a staple of horror that helped redefine the genre at a time when it was sort of lagging, but when you watch it now, it’s a bit painful – sort of like watching a recording of a play you were in during high school. Scary Movie takes your teenage years and laughs at the bad fashion choices and slang. Its ability to place its tongue firmly in cheek means that it transcends the trends by sheer force of sarcasm.

#2 – The movie theatre scene is everything

I have an unabashed soft spot for Regina Hall (really, go check out her charity work and interests – she’s smart and tries to give back to the community, and doesn’t sell out her private life. Respect.). I think her comedic timing is excellent, and there’s a standout in this film for her: as the obnoxious filmgoer that gets stabbed to death for being a pain in the ass during a movie. She is everything we’ve encountered and hated at the movies: the talker, the video recorder, the screamer, the spoiler. She’s one crying newborn away from being every last cliché of what we hate about the experience of going to the movies. Hand to the god, I once attended The Dark Knight – without my three-month-old, whom I left with a babysitter – where some couple brought their three-month-old because they could not wait to see it. I’m not saying this scene condones violence toward rude movie goers, but damned if there’s not severe Schadenfreude mixed in there. And Hall is bang on.

The thing I like about the Wayans brothers: everything is fair game. They don’t give a shit about your intelligence level, race, gender, socioeconomic status, etc. They just care about making fun of every last thing that surrounds them. Does the light touch it? Then the Wayans will make fun of it. I’ve always loved that quality about them. Can they overdo it? Sometimes. But I can respect that because Mel Brooks had that same level of not caring and treating every scenario as fodder for comedy. It’s more universal that way.

Yes, I know, this is the era where you can be out loud and proud. However, I can tell you beyond the shadow of a doubt that we have all met at least one person who refuses to admit that they’re part of the LGBTQ+ community. We all know this person, played with a completely straight face by Shawn Wayans. They’re as gay as the day is long, yet they won’t admit it. Nowadays, that seems puzzling, but the more things change, the more they stay the same. To see someone that deeply in denial can be a sad, pitying experience, yet the Wayans give you the moment to stop and stare with incredulity. 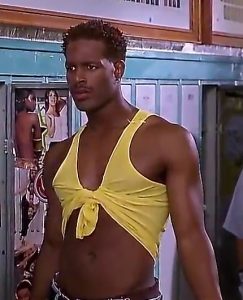 Everyone knows this person.

#5 – There are some uncomfortable moments captured for posterity

There’s a moment of transphobia in this movie, and I’m not recommending it based on that – it was done for shock value and laughs at a time when trans rights were ramping up, and it’s a point of shame. But there are some points in terms of preserving the unsavory parts of comedy and social commentary that have some value. For example, the police screaming to the door to help a woman who types “white woman in trouble,” or the press interviewing “the most ignorant person they can find”. Is that a tough watch? Yes. But that’s the beauty of treating a film like a historical document: we can see how far we’ve come and recognize the bad parts. Even if they make us squirm in discomfort.

Scary Movie is available for streaming on Netflix.