Warning: count(): Parameter must be an array or an object that implements Countable in /homepages/45/d96662078/htdocs/clickandbuilds/TheBackseatDriverReviews/wp-includes/post-template.php on line 316
↓
Home→Comedy→Weekend Movies: Five Reasons to Watch Scrooged

As much as I hate to admit it, I’m a Christmas person. There, I said it. I don’t really care who knows. As much as I hate battling the stores (online shopping is so my friend), as well as the oversaturation of commericals for the latest and greatest thing I just HAVE to buy for people – particularly my kids, who, thankfully, don’t really go in for that all that much – I really like the holiday. It’s a chance to make someone’s life better in an unexpected way, from those I care about to an absolute stranger. Where I draw the line is the feel-good Hallmark movie crap that’s out there. Thankfully, we have Richard Donner’s 1988 masterpiece Scrooged to come to our rescue. Here are five reasons to hop on over to Netflix and watch it this weekend.

This is going to sound so, so petty, but oh well. I hate Charles Dickens. I slugged through the usuals in high school, then read Bleak House in college. Bleak House, for those unaware, is a 970-page doorstop. The man got paid by the word and it shows. Did he make some good points? Socially, yes, he did indeed call bullshit where it was warranted. What gets me here is the style. It’s overly sentimental and preachy. If you want your readers to make up their minds, give them facts and let them choose. No one needs brow-beating. It carries over into most adaptations, which is a damn shame, because some of his stuff could be so relevant now but the adherence to the tone destroys it. However… 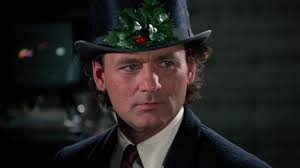 Some adaptations try so hard to accomplish polar opposites. On one hand, you have the need to re-create the original atmosphere, which leads to alienating a potential audience because it’s perceived as a stuffy period piece that is long out of touch with the modern world. On the other hand, you run the risk of updating too much and making a mockery of the core tale. Scrooged manages to translate the tale of a miserable businessman into the grandeur of the 1980s television world in a successful manner. Nothing feels forced; in fact, it’s a total indictment of the warped, solipcistic thinking of that era. This one actually got it right.

#3 – The Ghost of Christmas Present

I really am a giant child. I love Carol Kane’s Ghost of Christmas Present. Between the exaggerated puffy dress, the excess of glitter, and the high voice, she’s like the Tooth Fairy on steroids. It’s the decision to take this character in the direction of slapstick comedy that makes her pure gold. Kane’s Ghost does not miss a chance to kick the crap out of her charge, ranging from a right hook to a kick down a flight of stairs (my favorite line, for the record, is, “The bitch hit me with a toaster!”). There’s something inherently funny about watching a complete asshole get punched, kicked and dragged around. She could have easily gone the route of being a complete sap, too, because this character points out all of the suffering that’s currently happening that our hero can change. Her soft vocal tones strike the perfect balance with this violence, making her funny and endearing. If there’s an afterlife, I want that job. 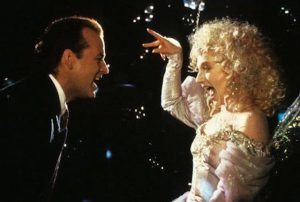 The bubbles are a nice touch.

I don’t care how much of a primadonna he reportedly is – Murray always manages to make me laugh. He’s such a smartass, and I connect to that. His turn as heartless television head honcho Frank Cross is glorious. Between the yelling and the deadpan sarcasm, he’s everything you’ve ever wanted to snark at someone and then some as he steps over the line of decency. We find that funny because we’d never say it. It’s hysterical when Murray brings his trademark sarcasm to it. The man can really make anything work, be it corporate greed or death.

Murray’s speech at the climax is so heartfelt and moving that I find I get teary watching it. It’s all about the comeuppance here: someone who has really, truly screwed up gets to reach out and make a deeply naked apology to not only those he’s wronged, but also make a plea to the rest of us that he’s a horrible warning of how not to be. Sometimes, the ultimate act of caring is to look at another person and say, “Don’t make my mistakes because you will be so miserable that it will eat you alive.” It’s that desire to give someone a better life than what you had. Watching someone change in front of your eyes and realizing that they can be so much more is truly moving. It makes you want to be a better person. And really, that’s what this season is all about. Go out and be someone’s miracle. 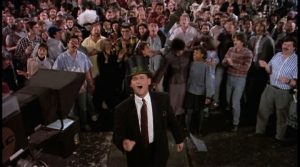 As only Bill could.

What are you waiting for? Get over to Netflix and watch this!