Warning: count(): Parameter must be an array or an object that implements Countable in /homepages/45/d96662078/htdocs/clickandbuilds/TheBackseatDriverReviews/wp-includes/post-template.php on line 316
↓
Home→Horror→Weekend Movies: Five Reasons to Watch The Crow (1994)

Chugging along on the Goth Kid Nostalgia Train, we’ve arrived at one of my favorite stations: The Crow (1994). I’m not talking about the sequels – we’re here for the original. Sure, it’s been bandied about that a remake might happen, but none could ever compare to the mystery and magic. The Crow is the story of Eric Draven (Brandon Lee), a musician who returns from the dead a year later to avenge his murder and the rape/murder of his fiancée the night before they were to be married. Swoon. Here are five reasons to watch it this weekend. 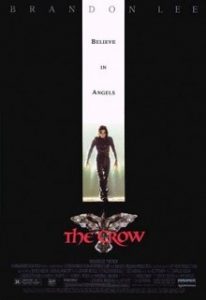 This movie is 24 years old. It should be graduating from college by now and looking for a job. After going back and rewatching it… it holds up with a bunch of stuff that’s still relevant. Sexy musicians wearing black is still a thing. Ditto latchkey kids with less-than-with-it moms. Organized crime? Yeah, that’s still around too. A woman being brutalized until she’s dead, with no one refusing to help bring her rapists/murderers to justice? Check. It’s dark and dirty at times, and the action centered around a man avenging the brutal death of the woman he loves continues to this day. It’s a film that managed to become timeless, despite that it’s early 90s. Well done, little film – well done.

#2 – It covers both Devil’s Night and Halloween

Halloween is the big gun, but Devil’s Night has some cowboys to it as well. Sure, everyone expects pranks and destruction on Halloween, but did you know that Devil’s Night was a big deal in the 1970s (all the way up until the 1990s) in Detroit, Michigan? It inspired the city’s community to come together and create something called Angel’s Night, where volunteers work to keep the city safe. That brought together about 40,000 people one year to help. That’s kind of wild, especially seeing as 1994 – the same year as our film – saw one of the worst Devil’s Nights in history. That piece of history right there is inspiring, and it’s enough to make you examine what the night entailed in the past. 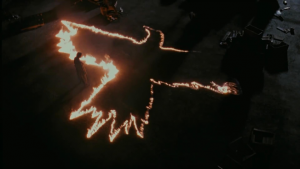 This film saw some tragedy that some young adults just won’t get. Brandon Lee died as a result of poor onset safety. In the aftermath, restrictions cropped up to help prevent a death like his – and let’s be clear, taking a slug to your abdomen and dying in surgery hours later from massive blood loss is a horrible way to go. When this happened, it was horrifying; I can remember being shocked and saddened as a 13-year-old, because that just didn’t happen to handsome movie stars. For those of us old enough to remember when this happened, it’s still traumatic; movies weren’t supposed to be real, least of all the deaths. For those of you young enough to learn about it second hand, be happy that safeguards are in place. Watch this film as a testament to the rules put forward to save lives.

I still listen to this soundtrack because it rocks. Stone Temple Pilots’ “Big Empty” was a massive hit, as was Medicine’s “Time Baby III” and My Life With the Thrill Kill Kult’s “After the Flesh”. It also featured a cover of “Ghostrider” by The Rollins Band (viva la Henry!), as well as a cover of Joy Division’s “Dead Souls” by Nine Inch Nails. Plus, it had Helmet, The Cure, The Jesus and Mary Chain, and Pantera. Good times, my industrial music-loving friends. 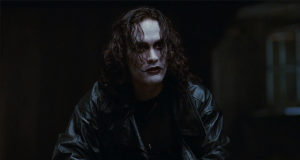 Alright, the rape and murder thing sucks, but the rest of it is lovely sentiment. Eric returns to avenge not so much his murder, but the rape and murder of partner Shelly (Sofia Shinas). She’s presented in shades of white throughout, and her suffering is shattering to quite a few people in the film. It makes you question how you’d react to someone hurting a loved one – The Crow proves that not even death can stop you from making sure the person you love is safe, and when you can’t do that, you make sure that those who hurt them get held responsible. Some talk a big game, but Eric actually follows through. That’s reassuring in a way: the knowledge that someone has your back, even in the end.

The Crow is a classic and if you don’t own it, I highly suggest you just buy this one.