Warning: count(): Parameter must be an array or an object that implements Countable in /homepages/45/d96662078/htdocs/clickandbuilds/TheBackseatDriverReviews/wp-includes/post-template.php on line 316
↓
Home→Crime→Weekend Movies: Five Reasons to Watch The Drop

Gang, I am not a crime movie fan. Never got into it. I think I’m the only person who has never seen all of The Godfather because she got bored and just couldn’t be bothered to finish. Undoubtedly, some of you will read that sentence, declare, “Fuck this!” and that will be the last we ever hear from you. However, I fear not – I found one that I didn’t mind. That would be the 2014 adaptation of Dennis Lehane’s The Drop. Here are five reasons to watch it. 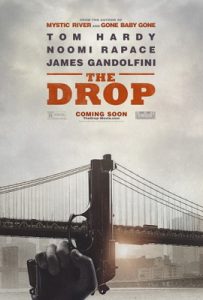 I am so torn on Tom Hardy. On one hand, you hear stories that he can be a major pain in the ass. On the other hand, the man is a damn fine actor that has this strange superpower: he’s pretty, but that fades away when you realize that you’ve completely lost yourself in his performance. The man IS that good. This is Hardy in fine form: sensitive, quiet, and willing to do anything to take care of people on the mean streets of Brooklyn. He’s always worth a watch.

Not only do we get Tom Hardy; we get a cuter-than-thou pit bull puppy. I have been around enough pit bulls to agree with the sentiments of this film: pit bulls are often big babies that sometimes have asshole owners. They really are sweet dogs that get a bad reputation. This puppy reminds you of how sweet, innocent and helpless many of them are. Plus… it’s an adorable puppy. If you don’t like puppies, you’re heartlesss. 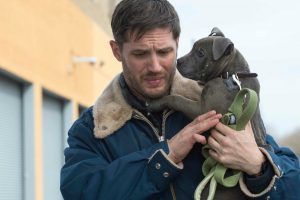 These are a few of my favorite things…

While I may not be a huge crime film fan, this one does feature Gandolfini. Like crime film or not, he’s good at chewing scenery. There’s an everyman quality to him that couples with something menacing – you know that this guy is going to watch while someone else breaks your legs if you fuck with him. To watch this and realize that it was one of the last things he did… that puts an asterisk on a year that has seen us lose more people than we like. It’s bittersweet, and makes you appreciate the work he did.

I mentioned earlier that I dislike crime films. This one is different, in part because it strays a bit from the formula. We’re not given amazing sex scenes with impossibly hot women that are around for the sole purpose of being the love interest that needs saving; there’s not scenes of decadence in terms of drugs and money. Nope. We’re left with a quiet bartender who meets a no-nonsense recovering addict (I’ll forgive Noomi Rapace for her accent), who pursues her as awkwardly as many of us feel in our own love lives. There’s a dog and a no-nonsense tone to it that gets right down to business, just like our protagonist, Bob. It made the story more real. It just happened to have a crime element to it. 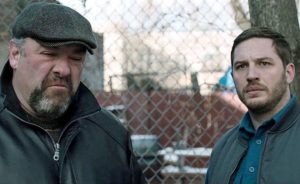 Do not mess with Chechen mobsters. That is all.

This one’s available on Amazon, iTunes and YouTube. Just in time for the Superbowl.