Warning: count(): Parameter must be an array or an object that implements Countable in /homepages/45/d96662078/htdocs/clickandbuilds/TheBackseatDriverReviews/wp-includes/post-template.php on line 316
↓
Home→Horror→Weekend Movies: Five Reasons to Watch The Girl With All the Gifts

Yes, I know, I’m a bit late to the party when it comes to Colm McCarthy’s The Girl With All The Gifts. I finally caught this one and am so glad I did. Fun fact: zombie literature and films typically soar in popularity during times of economic depression. Some say this is rooted in the need to clap back at the upper class (who would be pretty useless in a zombie apocalypse, as opposed to, say, a mechanic that could actually do something rather than scream, “I’m going to tell my daddy and he’ll get you fired!”). This one goes a bit further than the traditional tropes of nuclear fallout or a romantic love story. Here are five reasons to watch it this weekend. 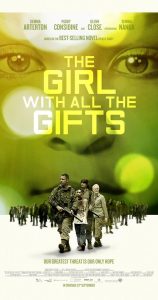 This reason is going to irk some people, but it’s my list, so oh well. This film sees a little girl named Melanie (Sennia Nanua) sitting in a government facility with other kids like her. Kids that were exposed to the fungus that turns them into zombies; they’re second-generation infection. These kids don’t get fully treated as people; we know that some bad stuff is happening to them. The thought is chilling, but as we saw in films like Logan, do you really think for a hot shit second that kids don’t get experimented upon? This happens to be a pre-existing group that could hold a cure, but damn, experimentation is cold.

#2 – A black female child as the lead

Sennia Nanua is excellent as Melanie, the child who manages to be a cut above the rest of those in her control group. She can come to logical conclusions quickly, she has a high IQ, and she’s a compassionate soul looking for a connection. That in and of itself is a great base for a female character – someone who struggles with her own nature while retaining her humanity – but then throw in that she’s a little kid, and it gets even more impressive. On top of it, Nanua is a person of color. I want to see more women of color in horror films because these women are just as gifted as storytellers and deserve to be here. Get them in the mainstream, dammit – give them good parts like this. Nanua did a fine job in this film, and I’d love to see her more in the future. 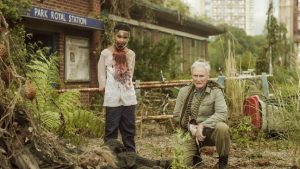 Anyone who knows of my love of Hansel and Gretel: Witch Hunters will recall my deep love of Gemma Arterton. This film gives her the chance to be something other than the sex pot. Arterton plays Helen, Melanie’s teacher on the government compound. Helen is a juggernaut of a human being: she fights for the humanity of her students, she teaches kids no one wants to be around, and when the life of her student is threatened, she hauls ass to protect Melanie. You know who this reminds me of? Every single teacher I know. Every damn one of ‘em. The teachers I’ve encountered would throw down for their students just like Helen. Some may argue maternal instinct, but it’s more than that. Helen is a teacher that cares and bleeds for the kid in her charge. It’s a testament to teachers everywhere.

#4 – A different start to the zombie plague

There are no rats gone wild or biochemical weapons here – everything stems from a fungus that is messing with the human race. M.R. Carey adapted his own dystopian novel to create the screenplay, and while he left some things out – such as alternating points of view and an entire sub group – he stayed faithful to the book’s rationale behind the start of the zombie menace. His script is adamant for a cure, which then morphs into a need for understanding, and really, how cool is it that he picked a fungus? An organism that many mistake for plant life does all of this, and ooooooh boy does it do a number on people. No one suspects it could do that much damage. There are fungi everywhere, which makes the concept even scarier. 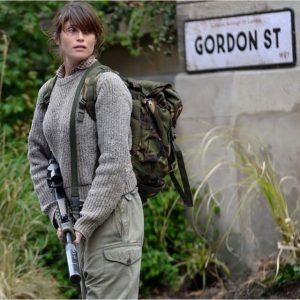 Moral of the story: fear nature.

Paddy Considine is quickly becoming an actor I want to see in everything. His character, Sgt. Parks, has a moment toward the end of a film where he gets to give some insight into his backstory. He delivers one line that sent chills up my spine and made me want to cry. See it just for that, because if an actor can make someone cry on a dime by baring unabashed emotion… that’s something special.

The Girl With All the Gifts is available on Amazon Prime.