Warning: count(): Parameter must be an array or an object that implements Countable in /homepages/45/d96662078/htdocs/clickandbuilds/TheBackseatDriverReviews/wp-includes/post-template.php on line 316
↓
Home→ghosts→Weekend Movies: Five Reasons to Watch The Lady in White

A couple of weeks ago, Fright Rags put on a great event at The Little Theatre here in Rochester. Their Saturday Night Rewind featured a 35mm showing of The Lady in White, a 1988 ghost story from writer/director Frank LaLoggia (who got up early over in Italy to do a Q&A with the audience, bless him). It tells the story of young Frankie (Lucas Haas), a child seeking to help the ghost of a murdered little girl move on by solving the mystery of her murder. Watching it reminded me of how much I loved this story as a little girl. Here are five reasons to find it and watch it this weekend.

I am a Rochesterian, through and through. My accent has the flat As and I come from a predominantly Italian-American family, plenty of which the region is known to have. This was filmed locally in the 80s, in Lyons, NY. So there’s a point of local pride when you look at a film and say, “That’s our airport!” or “Hey, Lyons – I’ve driven down there to watch the leaves fall.” You may not get it if you don’t live here, but here’s something you can get: picture a place that you love and associate as being home. Then put that place on film. That swelling of feeling? Yeah, that’s it.

Like most regions, we have a Lady in White story. The one particular to Rochester is the one associated with Durand Eastman Park. The variation of the legend is that the ghost of a woman roams the park looking for the man that killed her teenage daughter. Some say she’s there to torment necking teens; other say that she’s around to keep young girls safe from physical harm, such as rape and murder. It’s fascinating to research, and it’s creepy to go to those haunting grounds. It’s a reminder of the local legends that you may have as well. Everyone has one of those stories, so it makes the experience more universal. 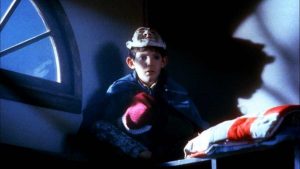 Lucas Haas is the main character in this, but the child acting in this film really carries the bulk of it. In between the scenes of Haas, we also get Jason Presson as his big brother Gino, who plays the part of teasing yet caring older sibling so well. There’s also Jared Rushton playing the prick bully we all grew up with to a remarkable degree of precision (sidenote: Rushton makes music now, and while he’s a talented guitarist, I still wish he was acting. He was good.). Then there’s Lisa Taylor, who played the grinning, love-struck Mary Ellen. We were lucky enough to have her in the audience with us a few weeks ago, and she was a peach of a woman (I’m not being sarcastic – if I call you a peach, I genuinely think well of you; it’s when I refer to something as “quaint” that you need to be concerned).

Again with the Scooby Doo theme this month, but what the hell: as a kid, there is nothing better than a good mystery. It doesn’t matter if you’re trying to solve who ate the last Reese’s Peanut Butter Cup (hint: it was me) or if you’re questioning a decades-old murder: nothing will occupy a kid like a chance to solve a head-scratcher. Better yet, nothing beats being the little kid that cracks this when an adult couldn’t. This film will make you remember what it’s like to be a child that questioned the unknown, the fresh pair of eyes on something an adult couldn’t see. It’s equal parts smile and new perspective. 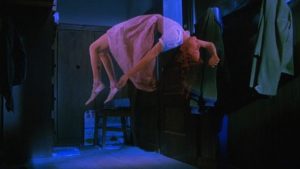 Every kid wanted to solve this.

I could probably label this one “growing up Polish” or “growing up Puerto Rican” but for today, it’s Italian because, well, that’s what’s on display, and I’m Italian-American. I could just about smell the sauce cooking at a few points. Praying grandmother with rosary beads? Check. Smoking grandfather? Check. Affectionate demeanor in everything from a smile to a hug to a smack on the back of the head? Oh double check. If you’re Italian-American, you’ve experienced all of that. And it’s a wonderful way to grow up.

Again, many thanks to the gang at Fright Rags for putting on this event – it was a true trip down memory lane. Go out and watch this one this weekend.