Warning: count(): Parameter must be an array or an object that implements Countable in /homepages/45/d96662078/htdocs/clickandbuilds/TheBackseatDriverReviews/wp-includes/post-template.php on line 316
↓
Home→Comedy→Weekend Movies: Five Reasons to Watch The Ten

Raise your hand if you love Wet Hot American Summer. (Me in the cheap seats: “OH! ME! ME! I DO! I DO!”) The best part about that crew is the fact that they’ve been working together for the better part of 25 years. The Ten is an effort from this team from 2007. It focuses on a frame story in which the ten commandments of Christianity are interpreted into madcap comedy tales involving murder, nudity and more snark than the eye can see. It’s a lot of fun. Before we get into the scarefest that is October, we’re going to recommend something funny. Here are five reasons to watch it this weekend.

Wain is pretty funny. One of my favorite gags he ever did with The State had to have been him answering Cindy Crawford’s fan mail. Since then, he’s gone on to contribute to Wet Hot American Summer, Stella, Reno 911! and Children’s Hospital. Marino is just as hysterical, participating in everything from They Came Together to Charmed to Bad Milo. Point is, these guys are funny. That translates into each segment they provide.

As much as I like to rip on Thoreaux, I do enjoy him. I know, I know – I give him shit for over-emoting and relying on raising one eyebrow like he’s trying to save the world with that one swatch of hair. While it’s a bit mean to enjoy someone that takes himself way too seriously, he uses it to his full advantage here. As the lothario version of Jesus Christ living it up in Mexico, he’s a blast. He’s so ridiculous that you can’t help but love it. 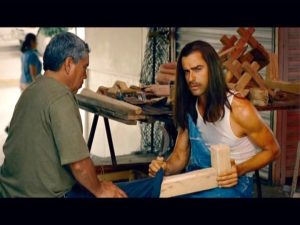 I respect Liev Schreiber, which says a lot. He’s a good director. He conveys heartbreak and terror easily as an actor. The real litmus test for me is comedy: if you can get me to laugh, we’re good. Schreiber has excellent deadpan abilities in the comedy arena. As a dad trying to one-up his neighbor, he’s funny in the same way as that friend’s dad that doesn’t have time for your shit. You can tell that he’s totally aware of this too, which just makes him all the more awesome.

Wedren works well with the original crew from The State. Most notably, he’s provided the anthem “Higher and Higher” from Wet Hot American Summer. What you may not realize is that he’s a part of one of the best U.S. music scenes out there: the post-hardcore indie scene of the Washington, D.C. area. He was part of the band Shudder to Think, which is wicked good. If you haven’t listened to them, I highly suggest that you do. They’ve contributed to some excellent soundtracks, including Velvet Goldmine. Wedren’s work, from his early days until his career scoring, is always appropriate and fun.

#5 –Winona Ryder and the dummy

Winona Ryder got to do some comedy here in two different segments. No contest, the second segment she’s in is the best. Hands down. I can’t spoil it, but I will give you this teaser: she develops a relationship with a ventriloquist’s dummy. It’s magic. Fucking magic. 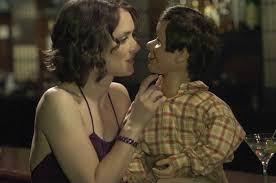 It’s available on iTunes and GooglePlay. Go ahead and pop this one in – the frame story isn’t the strongest, but it’s got some good laughs if you dig that sense of humor.