I had a few things planned over the coming weeks that seemed to fit into a particular theme: Stephen King. So, instead of doling out the King love little by little, we’re going for a theme week (much like when we visited Japan while I was in Canada). Gang, this is Stephen King week. 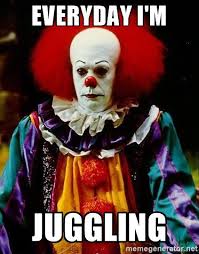 Tomorrow’s the end of the month, which means a Hail to the King from Dan. He’s tackling Cujo. There’s something great about getting the real-time reaction to this stuff during the month, which you guys don’t get to see (it’s entertaining and I wouldn’t trade it for the world). I’m going to warn you, this month’s entry might as well have been titled “Dan Smells Burning Toast.” It’s glorious. Dan is going to lose his shit, and you will not be disappointed. We’re going to piggy back on that and go for a bonkers theory regarding Barb and Stranger Things, which isn’t necessarily King, but it’s Stranger Things, so it counts. From there, Thursday will see a recommendation for Silver Bullet, a gem of the 1980s werewolf subgenre. It’ll be a full but rewarding week. Just stay away from the balloons, okay?