Like I mentioned yesterday… I went to see It. The film is getting rave reviews, and it’s also pulled in a pretty penny. At the time of publication, it’s estimated that the film has pulled in $179.2 million worldwide. The film was made on a $35 million budget. We are so, so, SO getting a sequel, and I cannot be happier. The cast did an amazing job, especially Sophia Lillis and Bill Skarsgard. This was truly their film. If you get the chance to see it, please do so. And do the rest of the world a favor and don’t talk, like the two women who sat next to me did (an Alamo Drafthouse is desperately needed in Rochester). 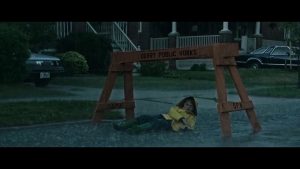 It wll knock you on your ass.

This week, we’re delving into the horror side of fall because it’s tradition and there’s so much good stuff out there. This is week two of the deconstruction of Seven. We’re going to look at issues of class and education in the film. Thursday will see a recommendation for The Transfiguration. There’s also going to be a trailer and a short too, so hold on and get revved up for fall with some horror!