Warning: count(): Parameter must be an array or an object that implements Countable in /homepages/45/d96662078/htdocs/clickandbuilds/TheBackseatDriverReviews/wp-includes/post-template.php on line 316
↓
Home→Children→“He’s creepy!” A Child’s Reaction to Ghostbusters

I normally don’t drag my kids into this kind of thing, but this one can’t be helped. I showed my kids the 1984 version of Ghostbusters months ago, because what kind of parent would I be if I didn’t expose them to the classics? Let me tell you, the reaction was not quite what I expected. While there were laughs, there was also a running commentary from my now-11-year-old. She was, how shall we say, less than amused by Bill Murray’s Venkman. 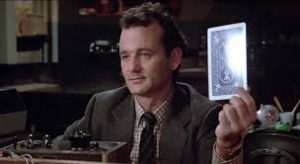 This isn’t going to be pleasant.

This shocked me to no end, as Bill Murray is right up her alley: he’s sarcastic, plays characters that display great disdain for everyone else, and has mastered the same cheeky smile she has while delivering a searing one-liner. They should be like two peas in a pod! Nope. Not her. Not buying it. It came to a head after the Venkman/Dana Barrett (Sigourney Weaver) apartment inspection scene. “Mom,” she said slowly, shaking her head, “that guy is creepy.” 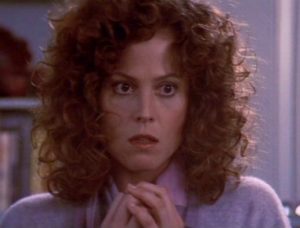 Intrigued, I pressed her for more details. “I mean, look at him! She’s telling him no and that she doesn’t like him and he won’t get out of her apartment! She doesn’t like him and he keeps trying to make it happen. He needs to learn that no means no, and sometimes, a girl just doesn’t like you, so you should get out of her house.” Damn, Skippy. By this point, though, she was on a roll, suggesting everything from calling the cops if he didn’t leave to defending herself with her cello.

Thing is, I hadn’t thought of it that way before. Upon closer inspection, Murray’s Venkman is pretty creepy. He uses a position of power as a researcher and instructor to attempt to seduce women, which is pretty vile. Hell, he unnecessarily shocks a young man that could easily be construed as competition – that’s not exactly charming. He’s nasty to other men he considers friends, often mocking their masculinity and their beliefs no matter how right they are. Then he starts in on Dana, who’s come to the gang after something scary has happened to her and she requires their services. He insinuates himself into any interaction with Dana he can get his hands on once he’s decided that she’s attractive and possibly vulnerable. The stalking after work and questioning her relationship with a male colleague? That’s gross, and frankly her relationships are none of this complete stranger’s business. When she politely declines his advances while under the guise of examining her home, he keeps going, changing his tone to mocking as she’s still in a position of needing his assistance. When she continues to decline, he refuses to leave. Yikes, yikes, yikes. 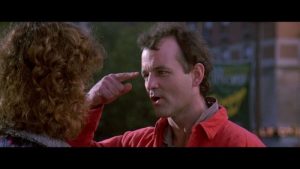 Yeah, this isn’t charming. At all.

Looking back, I loved this movie as a kid. As a woman that’s gone through some of the afore-mentioned “dating” rituals now, I can see where it’s unsettling. Are there parts that are still funny? Oh yes, absolutely. However, the tone can quickly become menacing, and it took seeing it through the eyes of my preteen child to actually see it. She’s right: his actions are creepy, but we brush it off because it’s a comedy set in the 1980s. That’s just how people acted back then, amirite? Worse yet: people still look at this and laugh it off because the guy is funny. Boys will be boys, after all… except that this particular excuse is just that. It’s an excuse without much thought behind it, placating the actions of someone who has no personal boundaries and a series of troubling, escalating behavior. Like Dana, most of us would tolerate it because we’re in a position where we still need help; that, my friends, is picking a vulnerable target. I’ve been in that situation before, of having to place nice with someone who is acting like a complete creep because I can’t afford to rock the boat. Between work or blowing in someone’s cheating ass to an unwitting spouse (again, reiterating that there’s a massive difference between being publicly poly and trolling for strange behind your partner’s back), there comes a point where you’re stuck in a tough position that has the potential to backfire on you while the aggressor weasels out of any answering. So we grit our teeth, seethe, and get through it. The difference now lies in the fact that I’m attempting to create a sense of self and safety with two female children who shouldn’t have to say to someone, “No, ‘boys will be boys’ is not an acceptable answer.” Watching an 11-year-old girl look at someone, label him a creep and refuse to get on board with him because he’s acting like a jackass means I’ve given her that confidence and sense of self. Despite that it’s a squicky moment for me as a woman, it’s a point of pride to know that no one is going to keep that girl down. 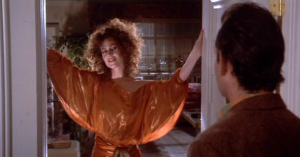 Still thinking about it this past week, I asked her about it again. She gave a shiver and wouldn’t refer to the character by name; only as “the creep.” From the mouths of babes.