Warning: count(): Parameter must be an array or an object that implements Countable in /homepages/45/d96662078/htdocs/clickandbuilds/TheBackseatDriverReviews/wp-includes/post-template.php on line 316
↓
Home→Comedy→Judging the Book: Appearances in Deathgasm

One of the best things about a metalhead is how truly surprising the individual can be. I’m not trying to be a condescending jerk, or even a patronizing one. Beneath the oftentimes long hair and dark clothing, you’ll find the person who is well-spoken, humble and extremely intelligent. Such is the case with followers of all different kinds of metal, be it death, doom, thrash or heavy to name a few. It’s a branch of music that’s just as rich, deep and varied as the rest of them, yet it gets a bad rap because it’s often considered dealing with dark subject matter. However, it’s far easier to portray the stereotypes of this genre than to give it thought, and that’s how we wind up with flat, one-dimensional characters. The good news: the extraordinary Deathgasm goes above and beyond the typical metal stereotypes, giving the characters and music a depth that’s typically denied metal and its followers. 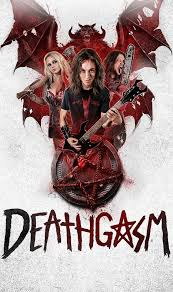 Let’s start with the characters. Brodie (Milo Cawthorne, who was such a joy to watch) is a devout metal listener. He also happens to be a young kid that’s lived through some nasty stuff: his mother is in a mental hospital after a meth bender, and his father has died. As such, he’s quiet and reserved, choosing to spend his time with geeky RPGers Dion (Sam Berkley) and Giles (Daniel Cresswell), two guys who accept the new kid at school into their friendship with open arms. By contrast, we’re given Brodie’s cousin David (Nick Hoskins-Smith), a normal-looking jock who is a complete sadist. When we first meet Dion, David is shoving die up his nose, which Brodie concedes is “the least embarrassing orafice that dice has been shoved.” When we meet Giles, David is spraying our gang with a urine-loaded squirtgun. Even girlfriend Medina (Kimberley Crossman) scoffs at David’s torments, despite that she’s the pretty, popular girl that, by most movie conventions, should torment the geeks and look down on them. Her defiant “talking about bullying isn’t a turn on” comment to her thuggish boyfriend is reassuring, and goes against the grain. This is someone who feels uncomfortable about the concept of someone getting hurt for amusement; she’s a decent person. In return, Brodie doesn’t ogle her when she’s pointing out where she wants to get tattooed, instead looking away respectfully. With the exception of David, these are good people. It’s pretty clear that our misfit Brodie is the one for which we’re supposed to cheer: he’s caring and shy, and just happens to love metal. He explains this to Medina (Kimberley Crossman) with precise articulation: “It’s like, when life sucks, and you feel alone and empty, stick on some metal and life is better because somebody else knows the pain and the rage that you’re going through.” You know what other genre I’ve heard described in a similar fashion? The blues. No one knocks the blues in that respect. 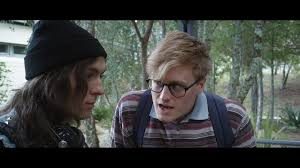 Geeks are the best friends ever.

The thing is, Brodie’s assessment isn’t wrong; in fact, metal is highly enjoyable for a multitude of reasons. Can it be dark? Oh yes – I’m not going to argue that it isn’t. Some branches of the genre worship Satan and welcome death, carnage and chaos. However, you’re kidding yourself if you think that ALL metal is this way. Sometimes, it’s as Brodie says: it’s a coping mechanism for people lost in a world that doesn’t seem to make much sense or have much justice to it. There’s also the matter of the abilities of the musical acts that get written off by most mainstream pop listeners. Some are better known than others – they’re bands like Slayer, Metallica (before those dicks went soft), Manowar, Bathory, Celtic Frost, and Behemoth. And damned if these groups don’t have some amazing craftsmanship behind them. The drums pound with an infectious rhthym. The vocals are intense and require quite a bit of practice in order to maintain them for any more than five minutes. Think about the amount of strain these guys are putting on their vocal cords – it’s staggering. Then there’s the matter of guitar work. Jesus, the guitar work in some metal pieces is absolutely incredible. Someone who can play that fast, loud and hard gets props from me. It commands respect. 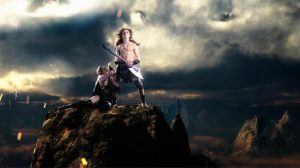 It makes sense, then, that our tale is one that combats the stereotypes. Our heroes are good people that are bullied. They don’t fit into what people perceive as normal: what they like – whether it’s gaming or music – is considered evil or dorky without taking a moment to dig a little deeper. Truly, it’s judging a book by its cover, especially when you take into consideration the nasty piece of work popular kids who rip out earrings and the holier-than-thou aunt and uncle team that has a stash of sex toys. The people you hate are the hypocrites, and they’re the ones that become the demons. It’s as though the film is calling out the everyday darkness in the actions of these people as opposed to the ones that admit that life can be difficult and dark. There’s beauty in admitting that the world can be a twisted place sometimes; it’s whether or not you fight that notion that detemines how realistic your chances of survival are.

The best part of Deathgasm is that it manages to let its main characers make mistakes, and we like them all the more for it. Whether it’s insecurity or summoning demons, our gang is far more honest than anyone else in the room. And they have damn good taste in music. At the end of the day, always trust the person that has good taste in music. In this case, it might save your life.