Warning: count(): Parameter must be an array or an object that implements Countable in /homepages/45/d96662078/htdocs/clickandbuilds/TheBackseatDriverReviews/wp-includes/post-template.php on line 316
↓
Home→Identity→Payback: An Analysis of Mulholland Drive

A few weeks ago, I did something bad. I recommended Donnie Darko as a film to review to the boys over at the Scott and Liam Vs. Evil podcast. Time travel can be a doozy with that one, but the guys were up to the task. As if that wasn’t enough, I also suggested that they tackle Primer. In the same sitting. Those poor, poor men. I felt poorly after that, so I suggested that they give me a film to analyze. A free punch, if you will. Their selection was Mulholland Drive.

Here’s the thing: Scott and Liam weren’t messing around when they challenged me to do this film. I had not yet seen it (yes, it’s supposed to be the best film of the century – I know, I’m a slacker), but I was confident that I’d like it. After all, I’m a David Lynch fan. Confusing as he can be, the man can get some incredible performances out of his actors, and plot-wise, he has a tendency to go, shall we say, utterly bug fuck, something most filmmakers won’t do – no one really wants to mess with their audience that badly. It runs the risk of alienating everyone, and poses the problem of whether something is really art or if someone has just shit in a box and labeled it art. Thing is, though, Lynch has some organized method to his madness. He likes to construct time loops, mess with identities, and pay homage to film noir. Weird as this comes off, despite that he goes all over the place, after a certain point, you know where David is going: he’s going to give us deeply unhappy pretty people that are stuck in some sort of time loop that causes them to become different people whilst unraveling a mystery, giving the audience a chance to question how happy they are in their own skins. 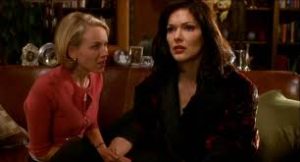 Unhappy and staring off into space: check.

In fact, that’s exactly where I’m going with this analysis. From time to time, I’ll get asked to recap just what the hell happened in a film; my piece on Comet dealt a bit with this, as the film jumped around quite a bit (and managed to be completely lovable, which is a story I’ve already told). I’m not even going to try that here because, well, it’s a David Lynch movie. You know damn well what you’re getting yourself into: at least one flow chart for plot points and a detailed character synopsis that would confuse a dungeon master. So what we’re going to focus on here is a recurring theme I picked up: the way that unhappiness and longing creates projections that lead to an odd blending of personalities and alternate reality, destined to loop itself because the people in question can’t see past themselves and their hangups.

In this respect, the action revolves around an epicenter of Betty/Diane (Naomi Watts), whose issues pop up in the forms of a clean slate, failed relationships, and a good girl persona. When we first meet Betty, she’s a fresh-faced actress, complete with perma-grin parents and a plucky blonde hairdo. Betty comes off as squeaky clean in sublime do-gooder fashion: she helps Rita (Laura Herring) try to get her memory back, she’s conservative in her dress, and she doesn’t take things too far in her flirtation with Adam (Justin Thoreaux, a.k.a. The Emoting Eyebrow). Betty doesn’t have to spread her legs to get a part – everyone in the audition room praises her performance, showing that she is that talented and driven. Betty’s got the stuff, and she’s a nice person to boot. She’s the very definition of The Good Girl. Given, she engages in some good, old-fashioned lesbian sex with Rita, but even this manages contain more lead up with the impressions of a caring friend acting to aid a friend in the throes of a breakdown rather than acting on repressed urges; there’s a basis of love as opposed to lust. It’s worth noting that Rita has the key to Betty’s box (oh, the places I could go with that one), though, and once the the key is turned, we get to see that Betty was actually the ideal version of Diane. Diane’s a mess: she’s not a successful actress, and she loves a woman named Camilla (Herring) who does not love her back. After a particular humiliation, she’s left hiring a hit man (Mark Pellegrino), who sets her up with the box/key scenario. This is what loops back around to the start of the movie: Rita is about to be killed, finds Betty, and starts her adventure. Despite that the mystery of the film revolves around Rita’s lost identity, it’s really the discovery of a broken Diane that lies at its core. 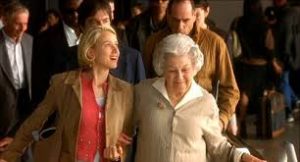 It makes sense that Diane would invent this dream world that manages to go on after her death – her life is crap. As Betty, she gets to be talented, loved, and helpful; as Diane, she’s rejected on all levels, from professional skill to friendship to romance. So how in the hell is it that Diane can kill herself, only to come up days later as sweet Betty Elms, the one that helps a beautiful amnesiac regain her memory while landing a part? The easy answer is that this is David Lynch movie (Exhibit A: the Bill Pullman/Balthazar Getty transformations in Lost Highway). The more involved answer is a bit of a doozy and requires some odd explanation; it may not make total sense, but bear with me, people.

If you think about it, Lynch gives us a hint in plain sight at the beginning of the film: several swing dancing couples on the screen, frozen in time, yet dancing in different iterations. There’s really only two or three couples in total, yet they’re on the screen multiple times, with a few different instances in the foreground and background. It’s the same people over and over again, occupying the same space and doing different things. This puts it in our heads that yes, these people can exist in multiple places at the same time. Once we’re comfortable with this idea, it’s easier to accept what’s going on: in reality, Diane is deeply unhappy and breaking down after a lot has gone wrong. She’s not good at what she does; the glamorous, successful woman she loves cruelly parades romantic dalliances around in front of her; she’s left in a state that causes her to take out a contract on her ex-lover’s life while enduring hallucinations that drive her to suicide. What’s the best place to shut up a reality like that? In a little blue box, under lock and key. It’s small and can easily be tucked away, and when opened, it reveals unlimited blackness. The world of Diane is contained within the blue box, which Betty possesses and to which Rita holds the key. Diane can lock up the reality and continue on as the happy, ideal version of herself: a new start that exists as a foil to the terribly unhappy timeline. This comes at the expense of others: we see the hit man makes mistakes, Adam is strong-armed into casting someone he doesn’t want in his film, and the man in the diner is haunted by a terrifying vision. Everything works out fine for Betty, though, who doesn’t have to experience anything near the level of pain she endured in her regular life. Inevitably, though, Rita shows up, who is a type of ideal version of Camilla: she can’t remember a thing about herself, which makes her vulnerable and dependent upon Betty. Betty is her sole friend and eventually lover; she’s safety and calm when they find a dead body. With reality tucked away in the blue box, Rita is helpless and dependent upon her savior.

So when the hit man tells Diane about the key to the blue box, he’s essentially offering her the chance to deal with her issues by facing them. She can construct the peachy life around her all she wants, but at some point, the pull of reality is going to lead to her exploring her issues. Diane is going to have to do this because that life where she’s the hero will ultimately feel fake, and it will crumble, leaving her right back where she was. Diane’s got to face this head on, and she couldn’t do that in her original form; she had to construct the life of being Betty in order to approach it at her own pace – Diane had to want to confront this because she wasn’t in the right shape to do so before that point. Let’s face it, hiring someone to kill the person with whom you’re in love can’t be psychologically easy. That’s bound to cause at least a small breakdown for someone who’s healthy, and really, Diane doesn’t come off as totally healthy. This is a woman that cried bitterly while masturbating after being rejected (and a hearty thank-you to my U.K. friends that have introduced me to the term “cranking”); she sits looking unhinged in a diner while plotting her lover’s murder. The ideal version of herself – Betty, a woman smiling and bathed in bright light – disappears once the mystery is about to be solved. In fact, the name of the club is “Silencio,” which is Spanish for “silence.” This entire film is an exercise in what we repress and refuse to speak out loud: it’s the inadequacy of our skill; it’s the harsh professional world we live in, where your accomplishments are trumped by who you know; it’s the presentation of a selfhood that is pure and helpful, ignoring your own shortcomings; it’s the lack speaking your heartache amidst cruelty. The representation of the blue box is both desire and hope: it’s a desire to shut out that side of yourself that you don’t want to admit is going through a horrible time, and the hope that there is somehow another version of yourself that gets to live life ideally. It’s like alternate reality on opposite ends of the pool: one side is shallow and the drains are clogged with hair, while the other side is temperature-controlled and there’s a fresh towel waiting next to your dreamgirl. 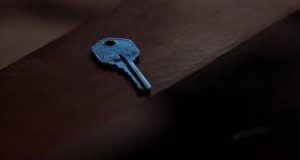 The question Mulholland Drive poses, then, is one of both possibility and wishful thinking. Is there really someone else out there enduring our hardships? Is this the real life? And most importantly, if there was a chance that you could shut away all of your unhappiness and live on as the best version of yourself possible, would you choose it, even if it resulted in your own death?

And just like that, Scott and Liam, my brain is officially fried.