Warning: count(): Parameter must be an array or an object that implements Countable in /homepages/45/d96662078/htdocs/clickandbuilds/TheBackseatDriverReviews/wp-includes/post-template.php on line 316
↓
Home→Gender→Pwned: Male Dominance and Romantic Rejection in Pixels

Let me start this by saying that never in a fucking million years did I think I’d be covering an Adam Sandler film for analysis outside of Punch Drunk Love. To be completely fair, Sandler didn’t write this – this film was penned by Tim Herlihy and Timothy Dowling, adapted from a 2010 French animated short film of the same name by Patrick Jean. I went into this with as open of a mind as I could: I had two enthusiastic little girls that love video games, and they desperately wanted to see this. So imagine my horror when I saw the creepy courtship of Lieutenant Colonel Violet Van Patten (Michelle Monaghan) and Sam Brenner (Adam Sandler), a Geek Squad-esque IT worker. While it was supposed to be a subplot about a woman abandoning snobby ideals for the simple everyman, the story takes a much darker turn in its delivery: that women absolutely must submit to the romantic advancements of the men around them while belittling their own accomplishments and standards. 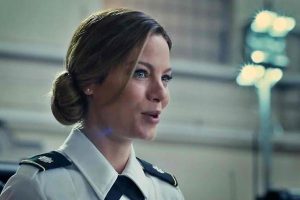 When we first meet Violet, it’s clear that she’s the love interest that needs to be knocked down a peg. Sam remarks when he meets the divorcee, “It’s just when your son told me that your husband left you for a 19-year-old, I guess I… you would be one of those women who was hot in high school but then let herself go. Pot belly, turkey neck, hairy chin. But clearly, that’s not the case. More like, ‘Whoa, I should have brushed my teeth before I left the house this morning.’” It’s such a touching assessment; one that’s meant to somehow be complimentary (she types in fingers dripping with sarcasm). No woman on the planet finds those words complimentary – it implies that only women who don’t perform sufficient upkeep are the ones whose husbands leave them for the newer, younger model, and when said husband leaves anyway, there’s an already-smarting wound that gets poked by asking what else is the woman’s fault for the break-up. It also leaves the door open for a double standard: while women must remain youthful, firm and beautiful to keep a mate, men are allowed to let themselves go, as Sam would put it, by omitting things from their routine like brushing their teeth. The beautiful divorced woman is then watched as she walks away, adding to the fact that she’s eye-candy. Later, Sam finds Violet in a closet, drinking and crying when her husband texts her that he’s marrying his much-younger affair partner; while first respectfully calling her “Mrs. Van Patten” when a work order is involved (because she is a client after all) and then proceeding to comfort her, he exchanges personal information and attempts to kiss her. She balks at the idea with their moment with, “You seem like a very nice guy, but I just met you. And no offense, but I don’t think my rebound guy is a 210-pound person who installs flat screens for a living.” 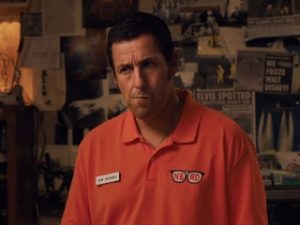 Sam doesn’t take the rejection lightly, accusing her of being a snob, a notion the audience is expected to ride along with for the sake of the wounded protagonist. Immediately after having his weight and profession insulted – which, let’s face it, he mocked her marital status and what a divorced woman is supposed to look like moments earlier – he asks, “Let’s just say I was a billionaire, and we were on my giant yacht… and I went in to kiss you. Would you kiss me back then?” She doesn’t answer, and he replies for added emphasis, “For the record, I’m an amazing kisser. All us nerds are. Cause we appreciate it more.” That, kids, is injured pride and justification of generalization: Violet rejected Sam in the same fashion that he used to stereotype her situation; therefore, she must be a giant bitch that hates all nerds and deserves his ire, because the nerds want it more and are inherently better at things like kissing. She should totally make out with an opportunist that just happens to be there because dammit, he’s a good kisser as a general rule. The fact that she’s vulnerable and has been insulted by this man who thought he was giving her a compliment is a non-factor to him: she should be happy he’s there, and when she says no, she becomes the bitch that dislikes all nerds just because they’re nerds; therefore, she should be punished. This attitude extends into their later interactions, as Sam tells her, “Too late, sweetheart. You had your shot and you blew it… Whatever you say, stalky. It’s over. Deal with it…” Before he realizes that she’s headed to the same spot as him, he assumes, “She went from zero to psycho in 3.4 seconds, a new world record.” It doesn’t stop there: at the White House, he publicly rubs in, “Somebody’s more important” before referring to her as “the riff raff” in a display of pecking-order supremacy. This continues even after the second alien attack, and he learns that he must join forces with her to save the world from an alien invasion. Sam can’t let her rejection go. He snarks her demonstration of the light cannons she’s helped develop on short notice, which leads to an exchange of insults during which he visibly bristles when she throws in a pot shot about kissing someone of better socioeconomic means over him. Sam’s not acting like a rational adult that was romantically rejected and has elected to move on gracefully: he behaves like a child by making petty taunts and generalizations to justify the fact that Violet didn’t want him. Let’s review: he insulted a freshly-divorced woman – already a sore spot – before attempting to move in on someone who was clearly hurt and vulnerable. Those are both dick moves, and she was right to reject him on principle for either of those issues. 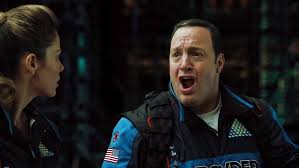 Before we go writing her off as a snob, though, consider Violet’s profession, which we learn about as the film progresses. She’s a lieutenant colonel. While the branch of military is not specified, a lieutenant colonel is not a rank at which to sniff – it’s in between a major and a colonel, and can command anywhere between 300 and over a thousand troops at any given time. Those are often intel positions, achieved after at least 15 years of military service. Considering that Michelle Monaghan was 39 when this film came out (and assuming that she was playing age-appropriate), that meant that Violet was a career servicewoman that started at age 24 at the latest and worked her way up the ranks in an extraordinarily difficult field. Couple that with the fact that she’s raising a preteen child, and it’s a tall order that this woman has balanced family and a career that’s led her to the Pentagon at a relatively young age. That’s some tenacious babe right there, and looks aside – which, let’s face it, she’s not a bad-looking woman – it’s reason enough for her to be picky. So when a man who stares at her like a piece of meat and approaches her with unbrushed teeth and demanding romantic interaction, do you honestly think he stands a chance? Is he really in any position to demand that someone who has busted her ass to get to the professional position she has while enduring an emotionally humiliating experience absolutely must suck face with him at the very least? Installing entertainment equipment and listening to a client have a meltdown doesn’t entitle you to a makeout session – we tend to call that “Monday” in the IT world. 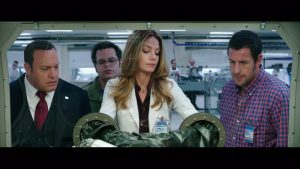 “Don’t mind me, I’m just creating a weapon that you’re going to use to defeat the alien menace. Please, talk about how I’m a bitch.”

This behavior falls into the troubling principle that a woman must accept the romantic overtures of anyone that presents them. In his head, it’s okay for Sam to hit on Violet because she’s hot – she’s not like the inferred other divorced women, who Sam writes off as being physically unattractive and therefore deserving of scorn and humiliation. Violet has worked damn hard to get where she is, and doesn’t have to accept every bone thrown her way; when Violet rejects him, she’s suddenly cut down as a stalker and snob as he assumes the role of the dominant party: he’s now rejecting her, labeling her a snob that can’t see past social preconceptions. Oh, the irony here – a man who assessed the physical merits of a woman is hating on said woman for not jumping him because he’s there in whatever condition he chooses to present himself. The reaction is so angry that it reminds me of a guy that calls a woman an ugly bitch because she wouldn’t send nudes after being told she’s hot. It’s pure douche-bro entitlement. It’s the need to put down a woman who says no rather than gracefully accepting defeat. It’s continuing to talk over her and mock her when she attempts to contribute to solving a problem, as Sam does during the film. It’s belittling her publicly because she rejected you in a private setting. It’s the balking at the audacity that someone said no to your advances. It’s thinking that every woman you hit on is going to say yes, even if you didn’t bother to brush your fucking teeth, because you’re the king of the universe and she’s been waiting for an offbeat hero just like you to show her what she’s missing. It’s insisting you’re a nice guy before you start to cut her down for saying no. In other words, it’s fucking Tuesday for the rest of us. 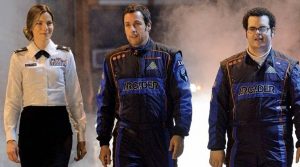 Seriously, that’s a whole lot of rank on her uniform.

In the end, Violet winds up with Sam after he saves the day. Nevermind that he’s been nasty to her, and that he hasn’t apologized publicly for bashing her. Nevermind that he hasn’t once said, “Hey, thanks for developing a weapon that we used to defend ourselves.” Nevermind that she was the breath of humanity that thought of both Q-bert and her child during a time of crisis. She was the prize for a man-child who saved the day by knowing how to play video games. Nevermind the whole Lady Lisa shenanigans (do NOT get me started…). And gang, if a movie like this made as large of a profit as it did, we need something with a way better message concerning self-worth and courtship if we want our women to feel like they’re not pressured into every romantic interaction presented.