Warning: count(): Parameter must be an array or an object that implements Countable in /homepages/45/d96662078/htdocs/clickandbuilds/TheBackseatDriverReviews/wp-includes/post-template.php on line 316
↓
Home→Feminine→The Lady and the Whore: Sex and Power in Brotherhood of the Wolf (2001)

Of all the DVDs I’ve managed to misplace over the years, losing Le Pacte des loups (Brotherhood of the Wolf, 2001) is the one that’s continually pissed me off. Despite that it’s not the best film in the world, I still enjoy it a great deal, in part because it’s Monica Bellucci as a badass hooker who also happens to be a Vatican spy. In fact, that description is enough to warrant a comparison of her character, Sylvia, with her romantic rival Marianne (Émilie Dequenne), an aristocratic woman in danger of being consumed by corrupt individuals. These characters, their socioeconomic stations, and their relationships with Fronsac (Samuel Le Bihan) provide ample commentary on how we view womanhood and socially-accepted gender occupations. 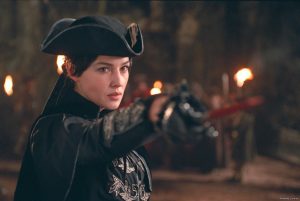 You’ll want to pop a cap by the end.

Let’s start with Sylvia. When we first meet her, Fronsac is looking for a good time in the local brothel, and he procures her services on the regular. For better or worse, Sylvia is established as a prostitute: some may call her a courtesan, but her surroundings still render her with a social stigma: she’s paid to have sex, and as crappy as we find the label, she’s looked down upon (we’re pro-sex worker here). Sylvia may be beautiful and exotic, but she’s still referred to as the “Vatican whore,” effectively reducing her to a profession without much social clout. While we call bullshit on this – because sex workers are people too, who deserve respect for doing a job some aren’t willing to do (not all heroes wear capes, Ms. Daniels) – the rest of the social structure at the time places her into a predefined compartment: she has sex for money, and as such, won’t be invited to fancy parties or aristocratic marriage participation because the perceptions of her profession taints her morally and seals off the doors of respectability. At the same time, Sylvia’s profession allows her access to upper-class men with secrets, the same men who just want to talk after some sweet lovin’. This aspect of her job grants her close contact with secrets that help her work as a spy. While it may not be the most socially-respectable work from the stuffy structure, working as a prostitute gives her a chance to keep her eyes and ears peeled for more information. After all, she’s just a whore – what damage could she do? A lot, as the events in the film prove: she manages to help take down a cult while saving Fronsac from certain death (at first poisoning him, then revealing that she merely knocked him out for a bit to appear dead and trick her enemies. Smart cookie.). 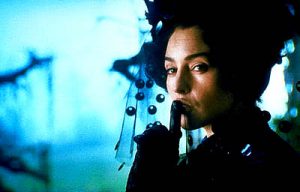 Marianne, on the other hand, represents the social grace Sylvia doesn’t access by trade. Marianne is the daughter of a local count. Her brother, Jean-François (Vincent Cassel in all his creepy glory), hunts in his spare time, and was wealthy enough to travel to Africa, where he supposedly lost an arm to a lion. She’s beautiful and is pursued by upper-class men, including her gross brother. Fronsac properly romances her, with lingering glances and no expectation of a sexual relationship. In this respect, Marianne is treated as an ornamental piece: she’s lovely, smart and wealthy, and as such, no one tries to sleep with her. Except her brother – and that’s where we need to examine the character a bit more closely. Marianne lacks freedom in many respects: she must abide by the confines of her social status/role, meaning that she cannot engage in sex before marriage because it harms her value, despite that her demeanor and actions point toward wanting Fronsac. The larger problem then becomes one of agency: Marianne is marked for death by Henri Sardis (Jean-François Stévenin), the leader of the cult, then is raped by her brother and left to die. Someone else gets to decide if this young woman lives and if she gets to have sex. She has no control. I really think these people would have regulated her bladder if they could have figured out a way to do so. 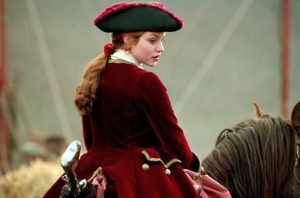 But hey, you get to wear a fun hat.

The difference between Sylvia and Marianne becomes one of agency in the face of social structure. Sylvia may be the whore, but she is the one who can move about more freely: she gathers secrets and holds a position with the Vatican that allows her to operate outside of the social structure while giving the appearance that she’s low-class. She’s beautiful and desirable, and appears to like her job – after all, who wouldn’t want to get paid to read Tarot cards and sleep with hot Frenchmen? Sylvia gets to wield a fan filled with cutlery, and she comes across as an independent woman with a low tolerance for anyone who would dare underestimate her and waste her time. Marianne, on the other hand, is completely defenseless: she has to operate under strict rules of conduct to remain insulated, and even then, she still winds up raped and near death. And let’s face the harsh facts here: Sylvia is infinitely more interesting than Marianne, who comes off as a sheltered, beautiful prize of the aristocracy. The main problem here is that being that beautiful trophy comes at the cost of personal agency: Marianne doesn’t even get a say in the aspects of her life, whether it’s fucking someone or drawing in air. She’s ineffective and requires rescue, whereas Sylvia can save everyone else’s ass without smudging her lipstick.

“Actually, you don’t shoot that way…”

In this light, it’s far better to be the whore than it is to be the respectable woman. Sylvia can take care of herself, whereas Marianne requires a dramatic rescue and magic to keep her alive. While Sylvia doesn’t walk off with Fronsac as a romantic partner, we get the impression that she’ll be okay; in fact, at film’s end, she’s not the one sailing off to a faraway land fraught with survival struggles and no safety net of wealth. This isn’t a woman that’s going to simper and pine in the corner; she’s going to shrug it off and move on to the next assignment in a way Marianne could not. There’s strength in that realization, which opens up the broader point: it’s not always best to be on top of the food chain, so focus on taking care of yourself, lest you become trapped in a gilded cage. After all, a golden cage is still a cage nonetheless.