Warning: count(): Parameter must be an array or an object that implements Countable in /homepages/45/d96662078/htdocs/clickandbuilds/TheBackseatDriverReviews/wp-includes/post-template.php on line 316
↓
Home→Authority→The Public Face: The Role of Privacy and Wrongdoing in Shut Up and Dance

The funny thing about morality is the fact that it’s relative. We assign meaning to action and motivation, marking the act of being a good person something that is defined by society. Such is the life of a sentient being. For some, being moral is absolute, a black-and-white definition with no room for interpretation or exception: don’t kill; don’t steal; don’t lie. For others, morality lies in intention rather than strict textbook definitions: it’s okay to kill to protect your children; it’s alright to steal if you’re starving; it’s okay to lie to keep someone you love safe from searing psychological pain. The waters are a bit more muddy when we take into account that some actions aren’t quite as bad as others. So what happens when the private life is used to exercise moral judgment over actions that aren’t entirely illegal? Well, that’s where Black Mirror’s season 3 episode “Shut Up And Dance” comes into play. 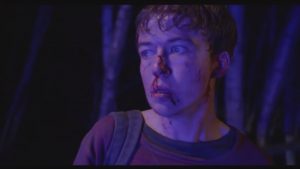 I made this face too.

The ending of this episode is a gut punch: after watching poor Kenny (Alex Lawther, who I hope to all divine powers has an incredibly long career) suffer through blackmail, armed robbery and murder, we discover that he’s a budding pedophile that’s masturbated to images of children. We also get the fates of the other players: Hector (Jerome Flynn) has cheated on his wife, who is emailed evidence of his affair; the unnamed man Kenny fights in the woods dies after the threat of being outed as a pedophile; the unnamed woman in the garage is exposed as a hotel chain CEO that engages in racist jokes; and, well, the unnamed man who delivers a cake to Kenny… we never quite find out that of which he’s guilty. This is one of the best tricks of the show: it takes people we have grown to feel sorry for – to actively fear for, because this type of blackmail could strike us too – and exposes some pretty nasty behavior, some of which is illegal and morally repugnant. 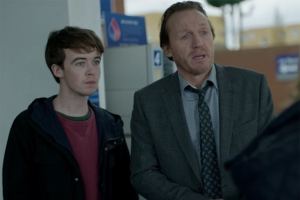 Kenny and Hector: partners in crime.

The problem isn’t reconciling your thoughts to the fact that Kenny, the man in the woods and the CEO are bad people who have done something illegal. Let’s be honest, their actions are not legal: engaging in any aspect of child pornography is illegal as much as it is wrong. The gray area here is the CEO, but let’s explore that one: if you’re cracking racist jokes with your friends, chances are, you’re denying well-earned opportunities to people that aren’t WASPs, which is punishable by civil judgment and some areas of employment law. Take into account that she works in the hotel industry – an industry known for problematic race and gender relations – and I’m willing to bet she’s up to her eyeballs in shady business practices that skirt the line of what you can and can’t do legally. Given, this is inference, but in terms of logic, if you’re willing to engage in a racist joke, more likely than not, you’re willing to deny an opportunity based upon gender, race, creed or orientation. Moving back to Kenny and the man in the woods, we can deep dive into their words to find motivation – namely, what they’re not saying. At no point does Kenny say, “I’m sick. I need help. I have an illness.” At no point do Kenny and the man he fights apologize for what they’ve done. They justify it. “I just looked at some pictures!” Kenny protests. The man he fights concedes that it doesn’t matter if he does win, because “my life is over anyway.” These individuals are not sorry – we never see them atone of their own volition. We see them try to cover their tracks. We see the shame of their actions, and rightfully so, but the unspoken theme here is that no one wants to be turned over to the authorities. No one wants to be held responsible for what they’ve done in both the social and the legal sense. They’re in it to protect their lives, not to become better people. 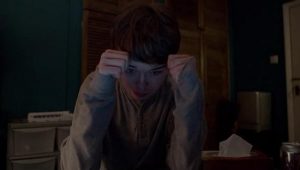 This is not the face of regret. This is the face that wants to cover his own ass.

So what’s the problem? This is where the episode gets tricky. We’ve got two people here that are definite gray areas: Hector and the unnamed man who delivers a cake to Kenny. Hector cheats on his wife; while not entirely noble, it’s not exactly illegal. As for the man who delivers the cake, his actions are not bad enough to have the police called, but they are sexual in nature, to the point that he is berated at home with, “Is that what you’ve become? A dirty, sick, disgusting pervert?” It could be a granny fetish, it could be homosexuality, it could be that he has a foot fetish. We don’t know, but it’s enough to earn the scorn of those he loves without the need to contact the authorities. And you know what? These two storylines are the ones of which we need to be afraid. It’s one thing to say, “A pedophile has to be punished.” Legally, for the safety and well-being of the children in this world, those folks should be exposed and turned over to the police. A cheater and a man who has some different sexual tendencies that are legal but not necessarily appetizing? No. That’s Scarlet Letter territory in terms of a need by society to regulate the sex life of someone else. We don’t know the whole story on either individual, and frankly, it’s not illegal and we have no background information. To paraphrase Dan Savage, the victim of the affair is not always the victim of the marriage. The business of infidelity is best left to the two parties in the marriage. Otherwise, we start getting into absolutes with little gray area, which winds up completely canceling out much of what it means to be human in a complex environment that elicits even more complex and personal reactions. This episode opens up Pandora’s box by picking and choosing who is punished, and once that happens, you’re liable to be judged in a relativistic manner. That means that your unintentional slight of a neighbor suddenly becomes public spectacle punishable by an unknown party in a painful and illegal way. It means that every last action can become fodder for someone else’s morals. It’s not so much that the criminals are punished this way – it’s that punishment is doled out based upon availability of personal information and a sense of moral high ground. 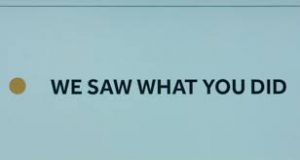 Cheating is not pedophilia by a long shot, and we can’t treat it like it somehow is. The real pickle of “Shut Up and Dance” then becomes the notion of privacy and publicity, and how far we’re willing to go to achieve a sense of moral superiority. It’s the difference between being an upstanding citizen and reporting illegal activity to the proper authorities versus living your life in fear of exposure over personal information the community may find unsavory. If that’s not a scary, complex predicament that requires thoughtful discussion and pause, I don’t know what is.