Warning: count(): Parameter must be an array or an object that implements Countable in /homepages/45/d96662078/htdocs/clickandbuilds/TheBackseatDriverReviews/wp-includes/post-template.php on line 316
↓
Home→Comedy→Weekend Movies: Five Reasons to Watch Ava’s Possessions

I like fresh takes on tried and true genres. Injecting comedy into horror is always a pretty safe bet for me. That’s why I decided to give Jordan Galland’s 2015 film Ava’s Possesions a shot. The film sees heroine Ava (Louisa Krause) attempting to unravel the mystery of her month-long demonic possession. Hilarity ensues. Here are five reasons to bop on over to Netflix and check it out this weekend. 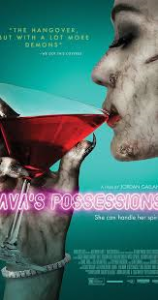 I’m going to out myself here as somsone who finds the concept of an alternate universe fascinating. It’s not even from the perspective of someone who would love to see different outcomes. A world where something is different based upon one fact being true/accepted? Sure, I can get behind that. In the universe where this film takes place, demonic possession is not only accepted, it’s common enough to have treatment programs and jail terms associated with it. It’s fascinating to hear conversations that go, “Yeah, I was possessed” and have no one bat an eye in response.

Completely normal in the most fun, batshit way.

Some of you may want to avoid this movie based on this fact, but for me, it’s a plus. Now given, Lennon’s stuff can get a little, shall we say, experimental. Some are quick to call him an overly-funded hipster. I’m not going to argue that today (and in fact, I will assert that Into the Sun is a fun album that deserves a far better shake than it gets). The quality he brings to this film is a quirky, playful soundtrack. There’s a dreaminess to the music that works well here. Bravo, Sean.

You know what’s funny? Watching a group of people confess to the things they did while they were possessed. It ranges from sex acts to animal murder to assault. Listening to everyone describe their demons (names and all) displays a comraderie that’s achieved only when you go through the same stuff together. That they all seem to get along and laugh at themselves speaks to not taking yourself too seriously.

#4 – A portrait of a shattered life

The life of the person who is possessed is often left shattered in this universe. Ava loses her job, her boyfriend, and the trust of her family during the tenure of her occupany. She then has to attend group therapy sessions in order to avoid jail time. She struggles with piecing together what happened during that time, and genuinely does want to get better. This is the portrait of an addict, peeps. It’s sympathetic and realistic without going saccharine or melodramatic. Go Galland. 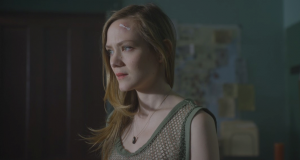 A sensitive yet realistic portrait of putting your life back together. Supernatural and all.

Krause goes from serious to sarcastic and back again with ease, which makes her performance as Ava totally watchable. She’s a lot of fun, and you wind up liking her. Some of the comments that are said with a straight face are pretty great, and you can only really get away with the line delivery in a horror-comedy about demonic possession.

While it may have a hair too many subplots, this one is definitely worth a watch. If you’re in the mood for something funny yet horror-themed, give this one a try.