Warning: count(): Parameter must be an array or an object that implements Countable in /homepages/45/d96662078/htdocs/clickandbuilds/TheBackseatDriverReviews/wp-includes/post-template.php on line 316
↓
Home→Comedy→Weekend Movies: Five Reasons to Watch Grosse Pointe Blank

Oh, Cusack. Let me count the ways I love you. Okay, fine, if we do that, we’ll be here all week, so in the meantime, let’s get back to why we love John so much. Sure, he was in a slew of 1980s comedies. Yes, he’s endlessly neurotic and a bit ageless. Let’s go with something that typifies why we love him so much. Let’s go for something other than High Fidelity. Let’s go for 1997’s Grosse Pointe Blank. I saw it in the theatres when it came out, and it’s been love ever since. Here are five reasons to watch a movie about a hit man going home for his high school reunion. 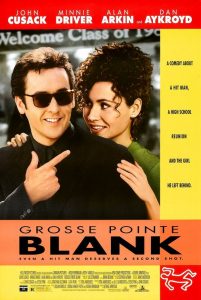 Cusack’s hitman Martin Blank has been experiencing a crisis of late and has enlisted the help of a therapist, Dr. Oatman (a brilliant Alan Arkin). Oatman tries with Martin; he really does. Cusack, though, is determined to be a neurotic mess that wants to work through his issues quickly so that he can get back to his life. Oatman and Martin are a great pairing, and they’re one of my favorite shrink-patient duos. Definitely worth a watch for them.

This soundtrack is typified by the Violent Femmes’s “Blister in the Sun,” which, given is a good tune, but it’s not the only thing here at the table. English Beat’s “Mirror in the Bathroom” is always a good time, but there’s also some David Bowie/Queen action (“Under Pressure”), as well as Faith No More (“We Care A Lot”). The real prize here goes to Guns N’ Roses’s cover of “Live and Let Die,” which I can’t hear without busting into a giggle fit. Really, the introduction sends me into hysterics. If you haven’t seen the movie, you’ll see why when you do. 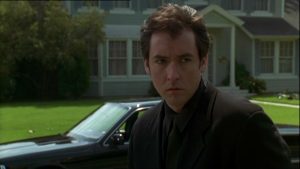 You can hear Axel Rose right now, admit it.

Martin has a secretary named Marcella, who negotiates and organizes all of his work as a hit man. Marcella is played by Cusack’s real-life sister, Joan. While the role isn’t large, it’s certainly memorable. Joan Cusack has such a fantastic yell about her. I love watching her lose her shit on the phone whilst negotiating a hit, then switching back into a pleasant conversation at the drop of a hat. For anyone that loved her playing slightly unhinged in Addams Family Values (guilty), she’s magic as only Joan can bring it.

Here is a nugget of truth some people just won’t admit: movies with gun fights are fun. There’s something about a shoot-out that makes make smile. Maybe that’s me being an American, but it’s a chance to live vicariously through movie characters. It’s something I’ll hopefully never have to do, and with the way it’s presented, there’s a sense of glee. We like the adrenaline rush involved in action sequences. For some of us, it’s the only exercise we get. 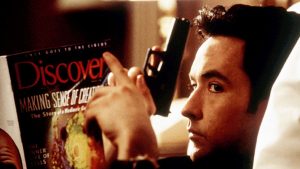 Okay, so I love Ackroyd. I really do. Loved him in The Great Outdoors, Ghostbusters and The Blues Brothers. As hitman Grocer, though, we see a different side of him: the murderer-for-hire. This side is a nice reminder that he can not only stretch his acting muscles, but that he can still retain that same deadpan, smartass vibe that we know and love. I always love it when I get to see someone with range. This is a reminder of how great Ackroyd is.

This one is available on Netflix. Perfect for a weekend in. Just don’t forget to hit the Ultimart beforehand.