Warning: count(): Parameter must be an array or an object that implements Countable in /homepages/45/d96662078/htdocs/clickandbuilds/TheBackseatDriverReviews/wp-includes/post-template.php on line 316
↓
Home→Comedy→Weekend Movies: Five Reasons to Watch National Lampoon’s Vacation (1983)

Summer’s almost over, and you know what? We need a vacation. We need a theme park. We need Wally World, dammit. We need the Griswold family. Pack your bags, gang – we’re heading to the car, grabbing some homemade Kool-Aid, and strapping our cranky aunt to the hood of the car. We’re going to watch National Lampoon’s Vacation (1983) this weekend. Here are five reasons to watch it. 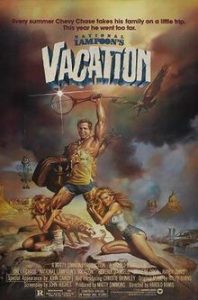 In recent months, people have been pointing out how the films of John Hughes have some problematic elements. I won’t lie, there are some issues there (quite a few – I’m looking at you, Sixteen Candles (1984) and your rapey tendencies). However, this film gets some help in that department from Harold Ramis, who directed it. The combination is a winning example of what happens when you throw two people together that pull sarcastic jokes and wry observations about middle class family life. Which, really, they did very well at a time when everyone wanted to glorify the ultra-famous and glamorous. Films like theirs helped lend a voice to the middle-class experience, which struck a chord for the audience. We’re not rock gods flying first class to Aspen; we’re stuck in that damn station wagon, trying desperately to make some memories.

I’ll be an old fart for a few minutes and bitch about the kids on my lawn. Kids today get to watch movies and play video games on car trips. Parents make sure that Bubble Guppies (which is the damn devil) is ready to go for a car ride that’s under an hour. You know what I did in the 80s in car trips? I annoyed my siblings in the back seat. I looked out the window. If I remembered to pack enough batteries, I could listen to my Walkman (Def Leppard or bust). And I was bored out of my skull until something inevitably went wrong. Trust me, something would always go wrong (ask me about the time my dad had “plenty of gas” and got lost on southern backroads one time – my mother’s ass is STILL chapped about that). This film captures that magic of boredom and Murphy’s Law so, so well. If you lived it in the 80s, it will resonate. If you didn’t, then be happy you didn’t have the character-building exercises some of your elders had. Now get off my lawn. 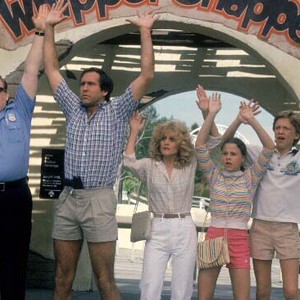 It’s not summer until someone is in handcuffs.

Confession: I’m not the largest fan of theme parks. They’re overcrowded. They’re expensive. They’re fairly soulless in the way that they treat their workers, as evidenced by the ongoing war between Disney and their union negotiations to pay a living wage (update: they’re getting raises over the course of two years, but I’m still side-eyeing them for how they treat their workers). Nonetheless, these theme parks still attract large followings. Some of these followers have a cult-like reverence for all things having to do with it – everyone can pick the Disney Mom out a mile away at the school gathering, and that’s an entire post in and of itself. Part of it is status symbol, but the other part is the sale of family memories. That’s truly what Clark (Chevy Chase) is after: giving his kids something fun to remember. When you scrimp and save and work hard all year, you want something to show for it; a fun family trip for most dads in the 1980s meant that they were providing in ways their own dads may not have done, whether it’s time or consideration. It’s a way to say, “I make sacrifices and I want to be there. This is what I’ve been working for.” The worship is easy to understand in this light.

For better or worse, we’re born into a family of biological relationship. As such, we have family members we turn crimson when mentioned, and actively stare with a gaping mouth when forced to interact. This phenomenon is more common than we care to admit; as such, it gets included here. Cousin Eddie (Randy Quaid, pre-Canadian fugitive years) is that relative. The stereotype gets established in short order: cheerful, but ignorant, trashy and perpetually poor. Eddie was such a huge hit that he made it into the sequels, but this film is where he started. Come watch the dawn of an era. 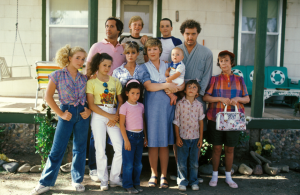 I am a sucker for a blonde woman. Beverly D’Angelo was always a welcome sight when I was a kid, as she was everything I found attractive (next to Kim Cattrall): long blonde hair, big blue eyes, busty and all-around sultry. Plus, her Ellen maintains that can-do attitude when things get tough. The hell with Christie Brinkley – Ellen’s the catch here. If you have the same taste I do, you’ll appreciate the walk down memory lane.

You can rent National Lampoon’s Vacation on Amazon.