Warning: count(): Parameter must be an array or an object that implements Countable in /homepages/45/d96662078/htdocs/clickandbuilds/TheBackseatDriverReviews/wp-includes/post-template.php on line 316
↓
Home→Uncategorized→Weekend Movies: Five Reasons to Watch Swiss Army Man

You have to hand it to Daniel Radcliffe. The dude could have easily lived off of his Harry Potter earnings and then some for the rest of his days, but didn’t. In fact, he’s managed to build a diverse C.V. of film work that has seen him doing everything from gritty dramas to rom-coms. One of these films is 2016’s Swiss Army Man, about the relationship between a flatulent corpse and a shipwrecked man named Hank (Paul Dano). Here are five reasons to check it out this weekend. 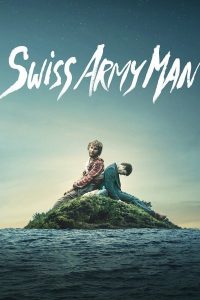 Make no mistake, this movie’s notorious because Radcliffe’s Manny is dead. Part of the fun lies in the fact that Manny’s corpse farts. We’re not talking tiny little toots that your grandmother pretends no one heard – this is the stuff of contests between two people that have been married for 28 years. It’s great. Anything that can propel you through the air is a good day. Even better: farting is not Manny’s only superpower. I won’t spoil it. You’ll thank me.

#2 – The ways we keep ourselves sane

When we meet Hank, he’s ready to kill himself. He’s been shipwrecked and doesn’t feel that help is coming; as time goes on, it becomes apparent that Hank is painfully shy and lonely. Out in the wilderness, it’s even worse. It’s no surprise then that the first interactions he gets with something resembling a human being – dead or not – tend to involve socializing. Through Manny, Hank keeps himself sane by reciting social nicety and story-telling. When the going gets tough, we’ll go through hell to find normalcy. That’s well-done here. 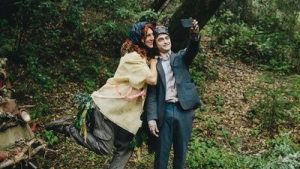 Hey, it’s a picture with Dano and Radcliffe…

#3 – Everyone needs a friend

The sweetness of the gestures in this film are staggering. Some days, you literally have to carry your friends around; other days, they spout some brutally honest truths to you that you may not be quite ready to hear. All facets of friendship that we need in our lives, and all things that we get to witness between Manny and Hank. The way it’s presented in Daniel Scheinert and Daniel Kwan’s writing/directing collaboration, the theme is apparent: we need somebody that gets us, even when we’re not fully ready for it. It’s the companionship we need that makes us bond into something beautiful.

This cast may be small, but they’re quite capable. As mentioned before, Radcliffe is consistently putting out good work, and I think we’ll be watching him transition from acting to writing and producing within the next decade (and rightfully so). Dano delivers such an aching performance that you want to hug him – anyone that can nail lonely and reserved that well gets my attention, because he doesn’t have to get showy and melodramatic. This film also features Mary Elizabeth Winstead, whom I absolutely love (and not just because she looks and sounds like my friend Cate, who is wonderful). Winstead isn’t just a pretty face – there’s a lot of dedicated performance in that one, and I hope she keeps working because she’s got some serious substance in her picks. Point is, this film could have gone the route of crass pretty quickly, but it doesn’t because it’s in good hands, both with the writing and the performances generated by the edgy writing. 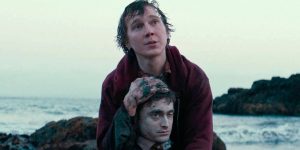 Kudos to this whole cast.

Oh this movies has so many feels. There’s quite a bit packed in thematically, but it balances out with the fantastical. Despite that it gets serious at times, you want to keep watching because at its core, this film has heart. It’s got bodily humor, but it’s also got points of personal growth for the characters, as well as good timing. Like I said before, this could have gone sour fast, but it doesn’t. You’ll find yourself wanting to hug the person next to you. And if you watch it solo, hug a pillow. No shame.

Swiss Army Man is available on Amazon (free on Prime, and none too expensive for rental). Check it out this weekend.